HIS FATHER KILLED HERS 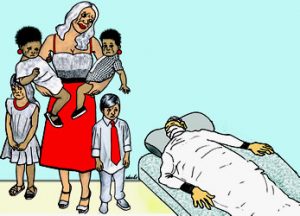 Dear Taiwo,
Please, how do I go round this situation I am in and how can I plead with my mother to allow me marry the woman of my choice? I am the last child of a family of six, three girls and one boy and my parents.

I grew up in a very comfortable home with parents who obviously loved each other. Our parents were into buying and selling, general contractor and all forms of business that could bring money, but very legitimate. Mummy and daddy had the same office and they dropped us in school one after the other, before going to the office together in those days and years.

They would pick us up, the same way they dropped us after close of office and of course, we would have closed from school and after school coaching. We always came home together. My parents never went out alone. If we had to go to church for evening service, we all did together and if they had a social outing, both of them would go together or none would attend the outing. These were the parents I knew; and we their children were brought up, to do things together.

It was rather a surprise and rude shock when daddy suddenly took ill and died few weeks after. I cannot forget those times, his brief illness and death caught us all unawares. I had just passed into the senior secondary school; two of my elder sisters were in the university then.
After daddy’s demise, things never remained the same. We became so poor that meals sometimes became a luxury. Mummy had to struggle all the time. Their business collapsed as she had to sell almost all they had worked for to pay up a bank loan and several times, she would weep like the world was coming to an end.

Of course, some of our family members from both sides helped us financially sometimes, but things never remained the same. The whole situation was made worse by the fact that mummy had to work hard to pay up the bank loan they secured to execute a business deal which went sour, when one of daddy’s friends a fraudster and 419 played a fast one on them. Mummy explained all these to us and we stood by her in our own little way.

She had to sell her jewellery to pay up our school fees sometimes even her clothes. To the glory of God, my elder siblings finished from the university and the one before me gained admission too. By the time I wrote my final year examination in the secondary school, things were just a little easy because my elder sisters had jobs and they were helping out.

After my secondary school, it was agreed by all of us that I should go and study Medicine in Glasgow Scotland, which had always been my father’s dreams since I had always spoken about my dream of becoming a medical doctor even while he was alive. My mother made up her mind to keep his dreams alive in me and we all agreed with her. Having passed my examinations well, my admission into the college meant that all the money we could save or lay our hands on had to be spent. My mother didn’t mind, inasmuch as it would make me happy.

I travelled to Scotland and promised my mother and siblings that I would make them proud and not disappoint them. I pleaded with my mother to keep fit and make sure I returned home to meet her alive and well.

Medical school and my stay in Scotland wasn’t an easy thing, because of my financial status. I had to forgo a lot of things and do away with some luxuries so that I could make do with the little I received from home. I was, however, lucky when in our second year, Omolayo and I became friends. We were classmates from the same country and town, we were on ‘hello’ basis. But on a fateful day, we were on our way back from tutorials and she fell ill. She had asthmatic attack, I was the only one who offered to help her. All others rushed to write a test.

We became quite close and inseparable. Her family back home was very comfortable and she became my financial pillar while I worked hard on our studies as I was more brilliant. She spoke about me to her parents and thrice her mum came visiting, even with goodies for me, without asking or knowing who my parents were.

I also told my people about her; I even told my mother her surname and she didn’t raise any objection, probably, because she couldn’t link her name with her family then. By the time we both finished schooling, our relationship had become serious and we had agreed to get married. She, however, had to return home immediately after school, but I stayed behind because I got a job. She met with my sisters and she was later introduced to my mother.

She used to visit me on holidays and on one of her visits she discovered she was pregnant when she arrived home. She informed me and we decided it was time I returned home and make a honest woman out of her. I had plans to return home and start my own clinic. She had discussed with her father who always treated me like his own son and he had made arrangement for all these because Omolayo and I had intentions of setting up our practice together.

As soon as I arrived home, plans were set rolling for our wedding and the first thing was that the two families would meet formally. It was at this formal meeting that my hopes and Omolayo’s were shattered. As we were being entertained,one of her siblings came to make an excuse for their parents and asked us to give them few minutes as they needed to take care of their father’s health needs.

We were all in good mood until her father entered the living room and my mother sighted him. The first thing my mother said was, ‘‘I can’t be in the right place’’. We all wondered why she said so, the next thing was, Omolayo’s father asked, “is this you, Made?,” he called my mother’s name.

Immediately, my mother stood up and asked us to leave. We were all shocked and surprised. The embarrassment would have been unbearable if we had gone with extended family members or friends, but thank God it was the first family meeting and we decided that it should be with the nuclear family alone.

In short, my mother stormed out and we had no choice but to follow. By the time we arrived home, mum was crying uncontrollably. We couldn’t pacify her. When she could finally hold her breadth, she blotted out, “her father killed your father”. We were all shocked! We had always believed that daddy died during a brief illness. It took us two whole days to get the story out of my mother.

She told us that Omolayo’s father and my late father were friends from school, in fact, Omolayo’s mother wasn’t his first wife ( that explained the reason both herself and mum didn’t know each other because they met at my graduation). He told my parents about a business proposal and he said he didn’t have money to execute it neither was he able to access a bank loan. Since my parents were able to secure one, they decided to do so and the interest and sharing formula were mutually worked out.

After the payment for the expected consignment of goods was paid into the supposed company’s account, Omolayo’s father disappeared into thin air. My parents according to my mother realised they had been duped. This led to daddy’s sudden illness and he died exactly one week after he took ill, leaving mum to sort out the debts and take care of us.

By the time she finished, we were all in tears. Fortunately, I wasn’t the one who asked the question on all our minds and nobody wanted to ask so as not to offend her. My immediate elder sister asked her,” mother, what next?”, her answer, though expected shocked us all, Keji (that’s me), will never marry that murderer’s daughter”, she said.

I wanted to say something, but my sister asked me to give her some time. This I did, and since then, mummy wouldn’t even hear Omolayo’s name talk less of her father’s. She said I cannot marry her and that was final. We tried to make her realise that she was carrying my baby, she would not even hear of this.

It has been well over six months now and Omolayo will soon put to bed, my mother still won’t shift grounds. Omolayo’s father had spoken with one of my sisters and I. He admitted what he did and promised to make up for it, though I am still unable to think of how. He wants to meet my mother, but none of us can tell her this because she cried whenever this issue came up.

Please, what can I do? I love Omolayo and will do all I could to make her my wife and the mother of my children. She was there for me when I was out in the cold without a cover.

I also love my mother and won’t want any evil to befall her. I am seriously in a fix, please, help me.
Keji.

0 thoughts on “HIS FATHER KILLED HERS”