HOMELESS AND LIVING ON THE STREETS DOWNTOWN KINGSTON 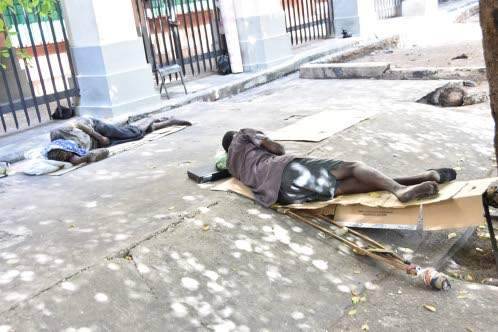 Life might not have been the most polished, but it was comfortable.
His closet was filled with an assortment of desert Clark’s (his preferred shoes), fitted jeans and “nice clothes” that he wouldn’t dare wear now.
His meals were sure and more balanced than what they are currently.
But everything changed when his partner since the early 1980s went blind and the bills kept raking in. The odd jobs on construction sites were not enough, since his lady was now unemployed. Life became difficult; no longer could he be as dependent on the woman who held a steadier job.
It would be emasculating to expect her to still be able to “give him a ting (money)” whenever he needed. So he made a decision: he would “tek to di streets.”
A 55-year-old man originally from West Kingston has made King Street in downtown Kingston his home. A difficult decision yes, but he’s sticking by it.
“Me cyaan go back an’ pressure di old lady,” the man who identified himself as PorkBone reasoned, while laying on a piece of cardboard along a slab of concrete behind the post office. “Dat nuh fair to her.”
You pass them daily, some wearing tattered, unsightly clothing, lying on the ground, sometimes covered with cardboard — the homeless. As you can imagine, it is a tough life.
The Board of Supervision (for the relief of the poor in Jamaica) under the auspices of the Ministry of Local Government found in 2012 that there are 1,075 homeless individuals roaming the streets of Jamaica. The most recent study, completed last year, has not yet been released.
The board categorises homeless as a person “who resides in places not meant for human habitation — cars, parks, sidewalks, abandoned buildings, and on the street; an emergency shelter; transitional and supportive homes for homeless persons who originally came from the streets or emergency shelters; in any of the above places, but is spending a short time (up to 30 consecutive days) in a hospital or other institution; has been evicted within a week from a private dwelling unit; has been discharged within a week from an institution, such as a mental health or substance abuse treatment facility or a jail/prison”.
While outlining that there may have been under counting, the survey found that the men numbered 913 (86 per cent), while women tallied 144 (14 per cent).
Kingston and St Andrew recorded the highest level of homelessness, with 514 persons being surveyed, while St James followed with 138.
“It nuh pretty out here enuh,” Pork Bone said of his living condition. “If you see some life weh live out here a night time an’ evening time man. You have some people weh just care ’bout dem dinner an dem pickney dinner fi go home,” he added, shaking his head.
“Night-time a jus’ one eye open, one eye shut. That’s why a daytime you will see so much a we a sleep,” the middle-aged man explained.
“A survival time now; it serious,” Pork Bone stated.

Hustle for survival
Life is a constant “hustle” for the homeless as they fight for survival.
“People buy cardboard from me. You will find when it come on to the five o’clock hours, me walk go ’round an’ collect up some cardboard and go ’round di road go sell inna market. Some a di vendor dem buy it,” he told the Jamaica Observer.
“When me go ’round deh me will beg a likkle piece a yam an some flour,” he added. “We sell bottle an’ di people dem buy string from we too fi tie up di box dem.”
He noted that he sometimes gets food from kind persons who take for them.
“People carry for we yes, but is not a must and some a dem nuh look after it good. You affi careful nowadays man. Wah day ya me get a food an’ me a tell yuh, it really mash me up,” he said.
If he manages to gather enough, he will cook a meal in his makeshift pot carved from a large cheese tin. He noted that he gets oil from chicken fat, which he stores in an old soda bottle.
Pork Bone recounted how in the first few weeks he fell ill, as his body took time to adjust to the ruggedness of his new reality.
“It hard out yah man,” he said.
“When me did first come out yah, me get sick so till me end up affi go hospital an’ dem tell me seh a gastroenteritis me did have. Me inna hospital ’bout two weeks an’ me family never know ’cause me never want pressure nobody. When dem hear a di day before dem discharge me from hospital, an dem cuss me an’ come fi me.”
He noted that he went home, recuperated and headed back for the streets when it began to feel as if he was becoming too dependent.
For Errol, who lives along Half-Way-Tree Road, at the top of Balmoral Avenue, life continues to be a hustle. Without any relatives left, he has been living on the streets for “a long, long time”.
“More time people carry food come give me an’ dem ting deh, but sometimes me go hustle it,” he said.

Opportunities needed
A woman who identified herself as Miss Portia, who occupies a spot close to Pork Bone, reasoned that the state of homelessness in the country is because of a lack of provided opportunity.
“The Government needs to create opportunity where people can live and feel a peace of mind. When you have your job fi go, an’ light bill fi pay an’ water bill, you grab you handbag and you gone. You don’t have anything to do, you come lay down a road side,” said the woman, who claims she doesn’t live in the streets but only “visits occasionally”.
“Three-quarter of the people; in the streets a nuh mad people, they just don’t have a place to rest them head. Them just need an opportunity to find food and pay their bills. Government must create a society where people can find food and pay their bills,” she stated, taking a break from reading her novel.
“The Government needs to rise up now, man. People are disappointed in them; both sides have disappointed the people. Hats off to the private sector and the Catholics, ’cause a dem a run dis ting, nuh Government,” noted Miss Portia, who told the Jamaica Observer she has been in the streets for the past seven years.
“We need opportunity for the people to live; nobody needs no handout,” she continued in her lengthy tirade.
The 2012 study outlined unemployment, among a list of other factors, as a cause for homelessness.
The survey stated that “the main predisposing factors of homelessness in Jamaica were gleaned to be as a result of mental illness (34 per cent), followed by family problems (nine per cent), substance use and dependence (six per cent), disaster (six per cent), eviction (6 per cent), Deportaion (5 per cent), medical disability (5 per cent), no money (4 per cent), indigent (4 per cent), unemployed (three per cent), elderly (three per cent), out of prison (one per cent) and HIV/AIDS (one per cent).”
It explains that 14 per cent of respondents mentioned other causes, including answers such as inability to pay rent, begging, abandonment and violence. Ten per cent of survey respondents outlined that they were in need of jobs.
The supposed street visitor pointed out that the opportunities she spoke of were not just for the homeless, but for all Jamaicans who, she argued, have been struggling. She told the Sunday Observer of instances where persons who, are not homeless have stunted the homeless’ chances of receiving help.
According to Miss Portia, some business places in downtown Kingston generally issue money or food to the less fortunate — often classified as the homeless — daily.
“But is not just homeless people alone a line up now. People weh live at dem yard a come collect too and go back home. I have seen people from as far as St Thomas, Spanish Town a come collect. There is a big crowd now, all young woman and children a come,” she stated.

Exiting the streets
When asked why they do not go to shelters provided, Miss Portia decried the state of some facilities, while her pal Pork Bone expressed distrust in the facilities.
“Dem nuh good. A beat dem beat up di people dem ’round dere,” she noted.
“Me nah mek dem come fi me and come jook (inject) me up. Everybody weh go wid dem come back mad,” the homeless man stated.
Despite having willing relatives to care for them, Pork Bone and Miss Portia insist on staying on the streets.
“Me daughter well want me come off, enuh. She all come fi me wa day yah, but me couldn’t go wid her. Is a one room she have an’ me nuh want inconvenience ‘ar, yuh nuh. What if she want har likkle fren come look fi har an’ ting? Me cyaan do dat,” Pork Bone, a father of three (two sons and a daughter), said.
“Plus she have mi likkle grandson wid her, so me nuh want crowd har too much,” he continued. “She nah lef’ me out man. A regular she come look fi me and say, ‘Mi fadda, how yuh do’? An’ dem ting deh. She will come sit down wid me pan di cardboard you see me have yah an’ reason wid me fi di day an’ buy me food till she ready fi go home,” he said with pride.
He told the Sunday Observer that his daughter is working to have him off the streets as she has promised.
“Me know she a go come fi me one day man,” he said. “An’when she come she a charter car fi me an’ a ting so nobody nah go affi a turn up dem nose at me dirty clothes or scorn me.”
Miss Portia, his companion and mother of two sons, said her children have cried in vain in multiple attempts to get her off the streets.
“I will stop coming eventually, but for now I have to keep in touch with the people. There is a sort of peace when I come out here come sit,” she said when asked why she stays on the streets.
The Poor Relief study outlines that 48 per cent of the homeless across the island are in need of permanent housing, while seven per cent of respondents highlighted the need for transitional housing.
According to the study, only 16 per cent of respondents had access to Government assistance, “which includes poor relief services, the PATH programme, NIS pension scheme, and other Government assistance”.
Sixty-three per cent were recorded as not having access to direct Government assistance, which does not include services provided through care facilities for the homeless and other service providers within various locations.

6 thoughts on “HOMELESS AND LIVING ON THE STREETS DOWNTOWN KINGSTON”