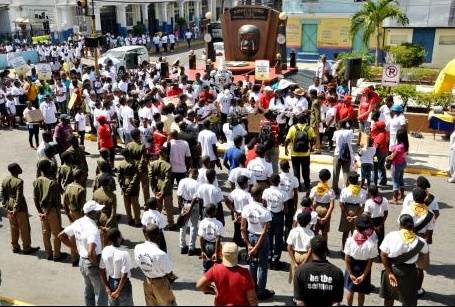 They laid roses for the dead and marched determinedly for those missing and presumed dead.

They celebrated children who are alive, and carried placards for the missing.

They begged adults – some relatives – to stop abusing the children.

They begged neighbours to report abuse – of any kind. They implored communities to become parents of every child. They marched to end violence against children.

Conceptualised by Kingston’s mayor, Dr Angela Brown Burke, the marchers yesterday made their first stop on Church Street at the Secret Gardens monument in honour of hundreds of children who have died violently.

Just a few metres across from the memorial is the mayor’s office, where the hundreds of children and young people gathered to begin their march, which fittingly ended at the park named in honour of St William Grant, one of the stalwarts of the movement for social and economic justice in Jamaica.

Brown Burke noted that when she was growing up, the “uncomfortable conversations” were mostly about the beginning of menstruation and the age of having sex.

However, with the regular attacks on the nation’s children, Brown Burke said there needs to be more uncomfortable conversations today.

“It may be about family members who are abusing children in the household. It may be about neighbours who know but don’t talk. We must talk, because children deserve our protection,” argued Brown Burke, as she called on every Jamaican to become a crusader for children’s rights.