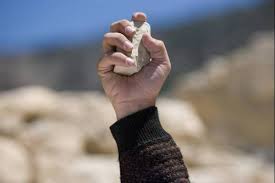 A man whose babymother told the court that he flung a stone at her and broke three of her ribs was taken into custody for sentencing when he showed up in the Corporate Area Resident Magistrate’s Court last Friday.

Lucien Anderson’s bail was revoked by Senior Magistrate Judith Pusey after he reluctantly admitted that he had hit the complainant with a stone.

According to the complainant, she was on her way home from a nine-night when the accused attacked her with the stone.

“I was coming from nine-night when I only see a stone pass me and me cuss a badword and say mind unuh lick me, and by the time me cud a say that, him fling a big stone in me side and bruk me three ribs dem,” she said.

Anderson, however, denied her report. “Your Honour, I have an out-of-port baby and from me go for baby a bare problem she a give me” he said.

“A so it go when you carry in another baby,” Pusey told him.

“I am not guilty. A she spit in my face, me have evidence,” Anderson said.

The magistrate then told him that he can either plead guilty in this court where the maximum sentence is three years, or face trial in the Circuit Court where the penalty is higher.

“Me not guilty,” Anderson insisted. “Me give har everything as a baby mother and she mek me lose me job. Look how much time she pick trouble with me,” he said.

Pusey then told him that he should make up his mind about his plea.

“Me lick har, me lick har,” Anderson then admitted, before he was remanded into custody.

“You stay with me until February 5 and think about you dirty deed,” she said.