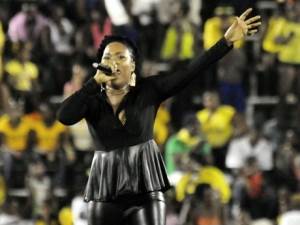 KINGSTON, Jamaica — Reggae singer and deejay, Queen Ifrica, on Monday sought to clear the air regarding her ongoing contentious association with the gay community.
Queen Ifrica told OBSERVER ONLINE that she is not homophobic, insisting instead that she has love for everyone in spite of their beliefs.
“One thing that a lot of people don’t know about me is that I love people, regardless of their religious, sexual or any other belief they might have. I just love people in general,” she said.
The outspoken artiste has come under increased pressure in recent times because of anti-homosexual lyrics she used while performing at the 2013 Independence Grand Gala in Kingston. As a result she has been banned from performing at several shows, the latest being an event at the Amazura Concert Hall in Queens, New York where she was the headline act.
Meanwhile veteran artiste and producer Tony Rebel who also spoke with OBSERVER ONLINE Monday supported his colleague saying a lot of people are not aware of the love she has for people, including those of the gay community.
Kimone Francis