Independent Commission of Investigations (INDECOM) boss Terrence Williams has described as “disturbing and unacceptable” the manner in which police personnel handle bodies and injured individuals at crime scenes.

Consequently, he is urging the police to act professionally and show respect to the victims and their families.

Williams voiced his concern in a statement released on Friday after what he said was the recent circulation of a video within public fora, which records members of the Jamaica Constabulary Force (JCF) handling the apparent lifeless body of John Hibbert on May 17, 2016 following his alleged fatal shooting by the police.

“The video shows police officers throwing Mr Hibbert into the back of a JCF service vehicle,” Williams said.

“What is both disturbing and unacceptable is the manner in which the body of Mr Hibbert is ‘flung’ into the back of the vehicle with absolutely no regard or sense of ‘humanity’ for him. All citizens, irrespective of what they have allegedly done, or who they may be, are entitled to be treated with a measure of respect,” the INDECOM commissioner argued.
“The removal of the deceased from any crime scene, whether by police officers, ambulance service or mortuary officials is deserving of a level of professionalism, dignity and respect, both for the dead and for those family members and friends who are often present,” Williams stated further. 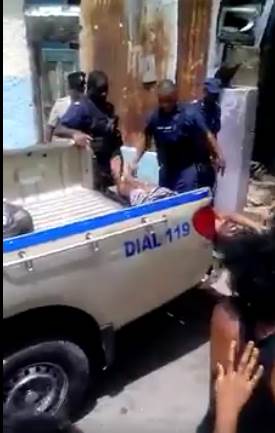 Agents of the State, he said, are not qualified medical personnel and as such cannot formally pronounce people as dead.

“They are required to always treat a victim as injured until pronounced dead by a qualified person. Hence, in all cases, a measure of urgency is to be employed when treating with injured persons,” Williams said, adding that Section 57 (3) of the JCF’s Human Rights and Use of Force Policy gives very clear guidelines which direct that assistance and medical aid are rendered to any injured or affected persons at the earliest possible moment.

“This video provides no evidence of this prescribed approach,” Williams said.

He said that INDECOM has observed a recent trend in which photographs and videos are circulated on social media platforms following security force-related fatal shootings. “Photographs recently posted on the Internet concerned two fatal shootings on the 12th and 13th of April 2016,” Williams said.

“The photographs show the clearest evidence of a dead person, taken in circumstances in which it is more than reasonable to assume were recorded by State agents or permitted by them, but in which it was reported that the injured persons were ‘rushed to hospital’. Such photographic evidence provides a contradictory account to there being any ‘injured’ person or any urgency in being ‘rushed to hospital’. Such photography eliminates the credibility of such statements,” Williams stated.

“The current video and recent uploading of pictures of people killed by the security forces is observed both nationally and internationally across the World Wide Web and does little to enhance the reputation of the Jamaican police service. The commission has received comments and complaints and we urge State agents to ensure they act, at all times, with the utmost professionalism and demonstrate the due respect for citizens and the families of these dead or injured men,” he said.