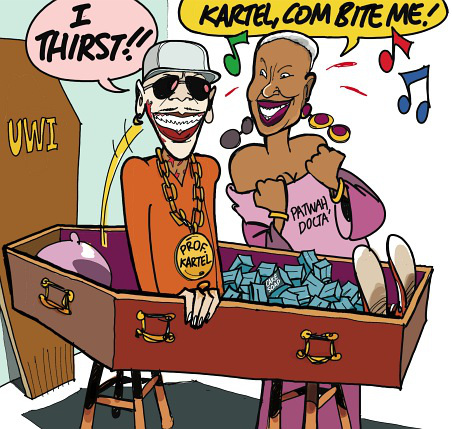 Two Fridays ago, I had a minor accident downtown at the Simón Bolívar Cultural Centre. I was there to record a television programme for the Creative Production and Training Centre (CPTC). Before we even started, my hand got caught in a heavy door. I rushed off to KPH.

I’d been advised to consider anywhere else: Andrews Memorial Hospital, St Joseph’s or Medical Associates. But there was no good reason to go uptown. On principle, I decided to wash in the first water I came to. Right downtown.

I was in and out of KPH in 10 minutes. And I was seen by a doctor! Admittedly, it helps to have a familiar face. As I left, I felt very ashamed when I saw how many people were waiting to be treated. But I just wanted a doctor to have a quick look at my hand to reassure me that my swollen, bloodshot fingers were not about to drop off.

The doctor asked me to bend my fingers. When I did, he said they probably weren’t broken. He recommended an X-ray but warned that it would take a very long time. “Read between the lines!” he cautioned. He had a sense of humour. You need that for KPH. He prescribed two Panadols and sent me on my way.

Despite the discomfort, I managed to record the programme. It was an interview with Amina Blackwood-Meeks for the series ‘Lyrically Speaking’. She was brilliant. She performed one of her own stories, ‘Structural Adjustment’. And she told a traditional Anansi story about how crab lost his head.

By the way, I have no apologies for those humourless people who didn’t like my modern Anansi story published last week, ‘How Anansi bruck up di JLP bell’. Proverbial wisdom advises us to tek bad tings mek joke. And that’s exactly what I was doing. Is either you laugh or you demonstrate.

It makes no sense to burn tyres and mash up roads because politicians don’t keep deceitful election promises. Or try to do it in drawn-out phases, as if that was the plan. After we burn up the roads, is we same one going to have to live with the potholes. So we need to find more creative ways to protest.

In her ‘Structural Adjustment’ story, Amina wickedly suggested that we put all politicians in a big barrel and roll them out to sea. I had a good laugh. But I know that won’t be the end of them. They will pollute the water like Styrofoam and keep coming back in bits and pieces to haunt us.

CTV didn’t seem to be much different from PBCJ, the Public Broadcasting Corporation of Jamaica. Both cable channels are owned by the Government of Jamaica. And their mandates are quite similar: to provide high-quality local content. But both stations appear to be equally underfunded.

Six years ago, I was asked to host a programme on PBCJ. It was called ‘Big People Sup’m’. It lasted all of four weeks. Well, four shows were recorded. But they kept on being repeated for quite some time. There was no money to keep the popular show going. In fact, there was no money to even get it started. There was no budget for a set. We ended up using a private residence. But that was definitely not sustainable.

It would make good sense to consolidate PBCJ and JamVision into one properly funded public broadcasting station. They’re now operating on the basket-fi-carry-water principle. This merger would not necessarily require job cuts. Synergies between the creative staff of both companies could result in profitable new programmes.

The Simón Bolívar Cultural Centre is a magnificent building. I’ve admired it in passing. Last Friday was my first time inside. It’s a fitting tribute to the Venezuelan national hero SimÛn BolÌvar, who was exiled in Jamaica from May to December in 1815. He lived at 33 Princess Street, a royal address in those days.

In his famous Carta de Jamaica (Letter From Jamaica), Bolívar wrote about his vision of Venezuelan emancipation from Spanish colonial rule. Two hundred years later, Spain cannot mind its own business much less that of former colonies! Like Greece, Spain is barely managing to stay in the Eurozone.

I did enjoy the excellent exhibition at the Simón Bolívar Cultural Centre, which includes the Carta de Jamaica. All the same, my accident was a high price to pay for that visit. I did do the X-ray. It showed that one of my fingers was broken. I remembered the work song Emmanuel Road:

No cry, gyal and bwoy

But I did cry, especially when it struck me that the main reason we were doing the television programme outa road was because the set at the CPTC studio had not been completed. Money was the issue, I suppose. Local programmes are essential for national development. They must be properly funded. Is time we stop playing with the creative industries.

– Carolyn Cooper is a consultant on culture and development. Email feedback to columns@gleanerjm.com and karokupa@gmail.com.