INSIDER EXPLAINS WHY SOLANGE WENT OFF ON JAYZ 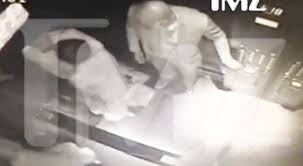 Update 3:20 pm ET: Sources who attended the Met Gala after-party are now saying that Solange became upset with Jay Z after a few of her non-famous friends shows up to the party uninvited, claiming they were guests of Jay.
“Two of her friends, who were not dressed for the Met Ball, showed up at The Standard and caused a scene downstairs,” a witness told the New York Daily News. “They wouldn’t leave and kept name dropping Jay Z. They were pretending they were guests of his and not hers. Management went to Julius (Beyonce’s bodyguard) and said there’s a problem.”
Once Jay caught wind of what was going on, he reportedly snapped at Solange, saying “don’t use my name.” Sources say that the scolding turned Solange sullen and she immediately wanted to leave the party, which explains the trio’s abrupt departure.
While they were heading out, witnesses claim that Solange learned of Jay’s plans to attend Rihanna’s Met after-party without his wife, Beyoncé, and all hell broke loose from there.
“She seemed drunk and irritated,” said a second source. “She said, ‘Why can’t you go home?’ and to Beyonce ‘Why does your husband need to go to the club right now?’”
Not being one to back down, Jay reportedly replied “You’re one to talk.” Sources claim his sharp response set her off, which led to the elevator altercation. Similar to the previous reports that are floating around out there, reps for Bey, Jay and Solo have not returned requests for comment.

If you have a pulse and an Internet connection, chances are you saw footage of or at least heard about the nasty altercation that took place between Jay Z and sister-in-law, Solange Knowles, at the Met Gala after-party. While the video revealed a lot about the level of rage that Solange felt towards Jay Z in that moment, there was no audio. So fans were left to speculate about what caused the showdown. But a few sources spoke to Us Weekly about the fight and they’re saying that it was all the result of a huge misunderstanding. According to one source, Jay said something that Solange took “the wrong way.”
“Solange flipped out over something Jay had said, that she took the wrong way,” the source claimed. “She took it too hard or too far. Not sure what it was, but she greatly overreacted.”
“Beyoncé tried to stay out of it,” added another source. “She does not approve of violence. They are trying to put the situation past them now.”
Of course, the conspiracy train has already left the station regarding possible reasons for the altercation, so fans may be a little reluctant to accept such a clean explanation. But it’s also interesting to note that sources are also claiming that Solange got into a heated dispute with Rachel Roy during the after-party as well. According to the insider, Solange yelled at the designer during the disagreement and Beyoncé “got in the middle of it.” Another source says that Solange was actually yelling at a few people and Rachel just happened to be included in the group. Similar to her altercation with Jay Z, folks are still in the dark about what caused the outburst. But there’s a good chance that the incidents are related. One witness says that following Solo’s altercation with Rachel, she “abruptly” left with Jay and Bey, but all seemed well during their departure.
As you may know, Rachel has ties to the Knowles-Carter family, which date back to the days of Roc-A-Fella Records. She is the ex-wife of Jay’s former business partner and close friend, Damon Dash.
Jay, Solange, and Rachel’s reps had no comment regarding the incident.
http://madamenoire.com/428821/oh-happened-insider-tries-explain-solange-attacked-jay-z/#sthash.KIhQvXfc.dpuf

0 thoughts on “INSIDER EXPLAINS WHY SOLANGE WENT OFF ON JAYZ”