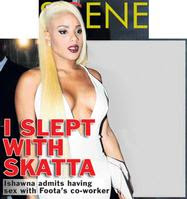 A very good friend of my sat in on Ishawna’s ONSTAGE interview for this weekend and asked me to look into what she is saying.(I will have my thoughts up later today) My friend said everyone was floored when she spoke about what Foota had done to her over the years and every one in the studio was at a loss for words and even he cried…. JMG has made me a skeptic so I will wait for the program but after the Chugit show down I did hear that it was the beatings that sent her into Skatta’s arms. It is not right and she should not have admitted it. I am now hearing from my friend who was at the recording of the show that the abuse was bad..So maybe we can cut her a little slack for now with the abuse part…but she still needs to come forward and say something to the young woman who had to leave….Foota now mi hear seh him going from selector to selector a tell dem doe play no song from Downsound or Ishawna but di man dem a rinse di two song dem because a nuff people doe like him……………….Later mi dash up him cease and desist :ngakak