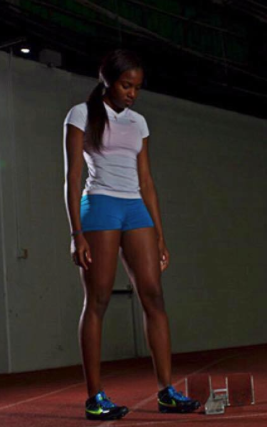 Jamaican born student and athlete Sabrina Cammock was found dead on Saturday in a Times Square hotel the New York Police are reporting.

Cammock hails from Watt Town in St Ann and attended the Bethany Primary School near Alexandria in the parish. She left Jamaica after completing Grade Six for the United States. She is said to be approximately 22 years-old.

The following is a report on the incident from the Associated Press.

NEW YORK (AP) — More tests are needed to determine the cause of death of a Syracuse University sprinter found in a Times Square hotel room during spring break, medical examiners said Sunday.

Police say there were no signs of criminality when Cammock was found at around 9:20 a.m. Saturday at the Hotel Edison. The hotel declined to comment on the death, first reported Saturday by the Daily News.

Specializing in sprinting, Cammock competed as recently as the previous weekend, when she was on the women’s 4×400 relay team at the 2015 ACC Indoor Championships at Virginia Tech, according to Syracuse’s sports website.

“Sabrina was a wonderful and remarkable person and student-athlete,” Syracuse track and field coach Chris Fox said in a statement Saturday. “Our team and coaching staff are devastated by her loss.”

Cammock, a senior, was studying public health at Syracuse’s David B. Falk College of Sport and Human Dynamics, Dean of Student Affairs Rebecca Reed Kantrowitz said in a statement. The university is on spring break.

Cammock had recently done an internship involving medical quality assurance in an oncology unit, giving a presentation about the subject as part of an internship symposium at her school in December.

A member of a school record-setting 4×100-meter relay team, Cammock won a Syracuse scholar-athlete of the week award last April. She also was named to the 2012-13 Big East conference All-Academic Team.

As a high-school student, Cammock ran for The Mary Louis Academy, a Catholic girls’ school near her home in the Jamaica Estates section of Queens.

“She’s better than anybody you know,” her cousin Kemal Brown told the Daily News. “She’s a baby, and she’s gone.”