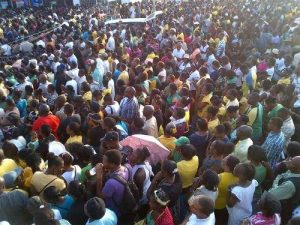 Thousands rally against tossing out buggery act; shout out for clean, righteous living
Stand up for families, fight against greed, selfishness, speakers urge
BY JAVENE SKYERS Observer writer [email protected]
Monday, June 30, 2014 5 Comments
Print this page Email A Friend!
A section of the large crowd which gathered in Half-Way-Tree for the mass rally yesterday. See report on Page 4. (PHOTO: MICHAEL GORDON)
POLICE last night estimated that around 25,000 Jamaicans turned out in their black, green and gold to support the Jamaica CAUSE (Churches Action Uniting Society for Emancipation) mass rally in Half-Way-Tree, St Andrew.
The rally called on Jamaicans to stand up for strong and healthy families, righteousness and justice as well as to resist the homosexual agenda and the repealing of the buggery act.
“I think this initiative is very good because it is important that we have a voice, because a lot of different things have been happening in Jamaica and we have to stand up,” said Camille Morrison, while adding that it not just goes against God’s will but against humanity, and in terms of homosexuality, biologically “di ting don’t mek sense and as such it should not be imposed upon people as if it is something right.”
After a short praise and worship session, the chairman of the rally, Alvin Bailey spoke to uniting every Jamaican, church, temple, and other institutions.
“We will do all that is righteous and Godly to accomplish the cause”, said Bailey, highlighting that Jamaica is a society that demands respect and recognition of sovereignty.
“Our emancipation means standing up for strong families, our emancipation means standing against the homosexuality agenda, emancipation for us means standing up against the repealing of the buggery law,” Bailey told the crowd, much to shouts of agreement.
Organisers said that there would be a series of talks and prayers throughout the evening to make people aware of what is happening.
“The seeds of greed and selfishness have been sown in the soil of corruption in public and private sector,” said Rev Donald Cole, in commenting on the state of the nation.
“As a people, we have compromised to crime, violence, immorality, abuse of the weak and disrespect of authority. When young people rape and kill each other we should take a serious look at what they’re watching and hearing,” said Cole, insisting that the church has faced and is still facing a challenge to be part of the solution in this crisis.
He said that the prophetic voice of the church is often ignored or discarded, yet the church is often accused of negligence. Cole went on to say that in more recent times there has been an attempt to deny and refute Jamaica’s laws and that if the symbols of the country such as the National Anthem and National Pledge are acknowledged and honoured, then Jamaica would be a social and economic model.
Cole said that the church will increase its prophetic role and will not be silenced, especially when it ought to be speaking boldly.
“We are standing here today because we want to see the moral thermometer of our nation rise again,” Cole said, while highlighting that the process of restoring the old boundary stones of right and wrong, lawful and unlawful and good and evil, should begin.
“Jamaica’s children belong to Jesus,” rang out the cry of advocate Betty-Ann Blaine, who invited the crowd to shout as she took the stage. She also encouraged the audience to spend more time with their children and go back to the book of Genesis.
“We not gonna mek dem mis-educate our children, we not gonna mek dem misinform our children,” shouted Blaine, who appealed to the crowd to make sure that children go back to Sunday School.
Blaine said that there has been a 72 per cent increase in buggery among children and as such “there is no way we changing the buggery law”.
“These folks not interested in people like me … me too old. Is the children them after,” stated Blaine who revealed that she went to a funeral of a nine-month-old baby who was buggered and then killed.
She told the crowd that “we not teking that kind of sex education to our children,” and urged parents to ensure that their child know that their body was the temple of God and that sex should stay until they have a career and get married.
“The battle is about your child. Let us declare again that Jamaican children belong to Jesus. We are going to fight, dem nuh see me fight yet, we are going to fight for our children, they will not get our children,” Blaine said before exiting the stage.
A prayer by pastor Harry Walcott and a speech by President of the Love March Movement Daniel Thomas were among the other items on the programme.
CAUSE volunteers invited people to sign a petition against the repealing of the buggery law which will be sent to the prime minster.