An Orthodox Rastafarian woman had a “piece of her taken away” when she was forced to reveal her dreadlocks to police after being falsely accused of stealing $7 worth of groceries, the Daily News has learned.

Francilla Daves, 47, was born into the religion originating in the country of Jamaica and took 11 years to grow her dreadlocks. She says her hair touches the small of her back.

“My hair is only for my King,” said Daves, 47, referring to God. “My hair is a sacred thing, it’s my covenant. Orthodox Rasta women do not show their hair in public.”

On Jan. 13, she went to the Key Food supermarket near her home on Baisley Blvd. in Rochdale Village, Queens, to pick up a few items. 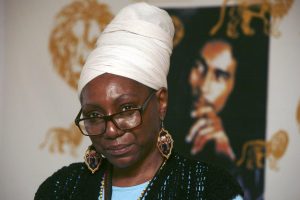 rating the dairy from the meats. As she handed her payment to the cashier, she was shocked when a security guard accused her of stealing.

The guard called the police and told them that Daves was caught trying to pass the cashier without paying, she said.

“I told him that’s not true and to please run the tape because I don’t steal. I don’t do that kind of stuff,” said Daves, a medical assistant who aspires to treat people in Africa.

You can enjoy fresh food without breaking the bank. Get a $20 gift card when…

Responding officers handcuffed Davies and took her to the 107th Precinct.

“There’s questions and concerns we have with the management and owners of this Key Food,” said the Rev. Kevin McCall, national crisis director for the National Action Network.

“I felt very violated, didn’t feel like myself. It was very humiliating, embarrassing,” Daves said of unraveling her locks.

“I felt very violated, didn’t feel like myself. It was very humiliating, embarrassing,” she said.

In the Rastafarian culture, women are not allowed to expose their hair or skin on their head.

Asked about the procedure for photographing a turbaned person under arrest, the NYPD pointed to its Patrol Guide. It says an arresting officer can transport the suspect to police headquarters for an official photo. The NYPD did not elaborate on the policy.

“The hair is beauty. It’s a sacred thing like in the Jewish community. Our locks are a part of the covenant with the almighty,” said Jahfire Clark, a friend of Daves and fellow Rastafarian.

After sitting in a holding cell for almost five hours, authorities gave Daves a desk appearance ticket and told her she could leave.

Anti-white gunman kills three victims in Central Fresno spree
“I asked if I could wrap my hair in a private place and they didn’t let me. They all were watching me wrap my hair,” she said with tears in her eyes.

Daves related the incident to her high priest, who informed her that under the circumstances she didn’t have to cut off her hair. But the priest said because she was violated, she has to fast, read her Bible and avoid interacting with too many people until she feels like herself again.

“A piece of me has been taken away. I was violated and treated like an animal. I don’t trust the police. I don’t feel like they really pardoned me,” said Daves.

“I asked if I could wrap my hair in a private place and they didn’t let me. They all were watching me wrap my hair,” she said with tears in her eyes.
As she awaited her court date, she got an opportunity to attend a Second Chance program through the Queens DA’s office.

Daves went to the interview for the program, where, she says, an employee told her she reminded him of Whoopie Goldberg.

The case was ultimately dismissed days before the April 3 court date.

“I was told there were discrepancies from what the guard said happened and what was shown on the video at the store,” said Dave, adding, “the prosecutor said they didn’t want a lawsuit.”

Dave intends to file a complaint with the Civilian Complaint Review Board and have attorney Ted Kessler represent her in legal action against the NYPD for violating her religious rights and the supermarket for the false allegations.

Longtime stalker begs to marry Malia Obama at Tribeca internship
“We are calling for the store and police department to issue a formal apology because this could have been avoided,” McCall said.

“I couldn’t sleep, couldn’t eat. All I could do is talk about it … I’m worried about my mugshot being out there, that there’s a warrant out for my arrest, that a system glitch would happen. I have to walk with this paper everywhere I go,” she said.

A spokesman for the Queens DA’s office and the NYPD confirmed Daves’ case was dismissed and sealed.

5 thoughts on “JAMAICAN RASTAFARIAN ASKED TO REMOVE HER TURBAN”