KINGSTON, Jamaica — Minister of Finance and the Public Sector Audley Shaw today revealed that Jamaica’s largest export to Trinidad and Tobago are not manufactured products but rather, “empty oil tanks.”

Speaking during his presentation to open the budget debate on the Government’s plans to finance the $580-billion budget and meet its commitment to reduce personal income tax in Parliament today, Shaw said it is a serious situation that must be addressed.

He said that in 1989, Jamaica ran a balanced trade account with CARICOM, including Trinidad and Tobago where the country purchased as many goods as was sold in the CARICOM market.

He used trade figures from January 1 to April 30 of this year between Jamaica and Trinidad and Tobago to show the “most stark contrast” which revealed the decline in Jamaica’s productivity and export competitiveness. 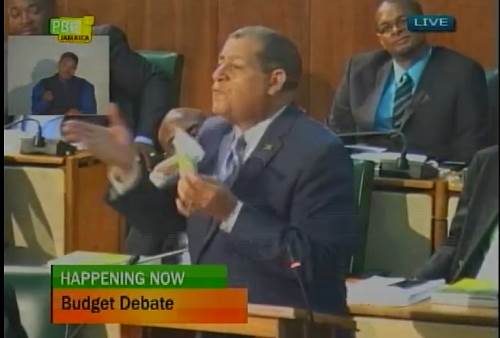 He said figures from real-time information yielded at Customs show that while Jamaica imported some J$13.4 billion from Trinidad and Tobago, Jamaica only exported J$178.9 million to Trinidad and Tobago over the same period.
“No wonder we are treated with impunity and told there is a special area set aside to deport us overnight,” the minister quipped during his presentation.

“So, Mr Speaker, apart from the J$23 million of real exports, we exported back to Trinidad and Tobago empty tanks — $117 millions (worth).

“You know what the empty tanks are, that is oil tanks that came down from Trinidad with oil and we export it back and they put a nominal value on it,” Shaw explained.

“We exported empty tanks back to Trinidad, so-so air in these empty tanks,” he said.

The finance minister said the figures paint a “picture of the seriousness of our situation”, which must be addressed.