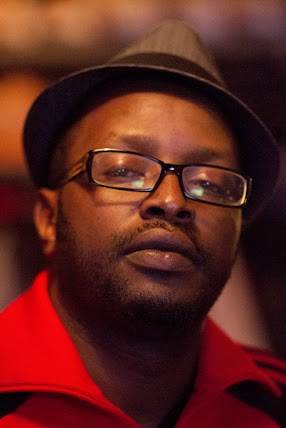 Hi How are you?
I’m fine, just lots of action around Christmas so busy time for me.

For the record please say where you’re from?
I’m kind of like a global soul who has lived everywhere but I’m originally from Nairobi Kenya.

What do you do?
I’m actually a music blogger, music promoter, cultural activist and entrepreneur. I just love reggae music.

What kind of music do you promote?
I have been involved in promoting Hip Hop, reggae and Afro Pop.

How long have you been writing about music?

I have been writing about music for over 10 years.

What is your favorite genre of music and why?
I love Hip Hop and Reggae because as an urban black individual this music speaks to my soul the most.

How do people respond to it?
They feel as if these reggae artists have lived in Kenya all their lives. They know the lyrics and really idolize some of the singers such as Burning Spear who got his name from Kenya’s first President Jomo Kenyatta whose title was – The Burning Spear.

What are some of the names of the Jamaican artistes who have been to Kenya?
Hundreds of Jamaicans artists have been to Kenya from Shaggy, Sean Paul, Cecile, Gregory Isaacs, Popcaan, Israel Vibrations, Morgan Heritage just to name a few. Just so you know how popular reggae is. Kenya has just celebrated its 50 Independence Anniversary and Tarrus Riley was main star of that celebration. Do I need to name more?

How were they received?
They were received like royalty. Reggae has a major influence on Kenyan society. You have Kenyan kids speaking patios and have never been to Jamaica.

Which Reggae artiste do you feel has had the biggest influence in Kenya and why?
In the 80s of course – Bob Marley, in the 90s – Chakademus & Pliers, in the 2000s – Beenie Man, in 2010s – Movado. Really Kenyans follow everything that Jamaica is listening to. They get the videos they listen to the radio stations online and keep up with what’s new. Mostly the Roots Reggae is more popular though.

Why do you feel Reggae has touched Africa so deeply?
Africa has a lot of poverty and Africans have a perception that this music speaks to the poor unlike RnB and Hip Hop.

Do Kenyans know about Jamaica’s biggest one night concert Sting, if so what do they know and how do they feel about this year’s 30th celebrations?
Yes they do know about Sting. Especially the diehard reggae fans. I don’t think they’re that concerned about its 30th anniversary. Unless someone from here makes it a big deal.

This year, in a bid to truly reach out to Africa, the show’s promoters have come up with a very special price only available to Africa, how do you feel about this ?
I think it’s amazing that Sting has thought about Africa. This will really reach out to the masses.

What do you think of the lineup?
I think the lineup is massive. It will do wonders.

There will be a lot of older acts returning, specifically Super Cat, how do you feel about this?
Super Cat was huge in Africa this will be a welcomed act.

Next year, there are plans to invite more African artistes to the show, who would you recommend?
I recommend Wyre, Bafu Chafu, some Reggae DJs including Chris Darling and Dohty Family. Also invite me as a blogger.

How has Reggae music influenced you as a person?
Reggae but me in contact with my reality. Reggae makes me think clearly.

About how many Kenyan Reggae artistes are there?
I would say over 100 reggae artists in Kenya.

For Jamaica as a small island that has created its own music which has reached all corners of the earth, what do you think it says of the people, and Africa as a part of Jamaica’s heritage?
The African people have a lot of soul.

How big do you think our music could become?
Reggae might just save the world. That’s how significant it is.

Do you believe in marriage?
Of course I do. Man and woman were created to build a union of procreation to continue with the mandate that God put upon us which is to grow his creation.

Are you married?
I’m just about to get married.

Do you consider yourself a family man?
Yes I do.

Based on your opinion how many wives do you think is fitting for a man to have and why?
I think that varies with individuals. One wife works for me unless there’s a discussion with my wife about getting a second partner.

Through reading and research, I have seen where the foundation of many African societies is family oriented and structured, how effective do you think this is?
I grew up in a structured family and that has guided me in my choices and respect for life and people. It is very important to have a great family structure.

If you had a staff, like moses of the bible in what direction would you lead blacks?
I would definitely lead the blacks. My company is called Spark Africa; which means to spark a light among Africans so they can wake up and see what value they have. I’m all about leadership.

How many languages are spoken in Kenya?
Kenya has two official languages that English and Swahili. Unofficially there are over 40 other languages spoken by the people of Kenya.

How similar is patois to any of these languages?
There is a street language similar to patois born in the cities of Kenya. The language is called sheng’. It’s a mixture of English, Swahili and African dialects. It’s not officially recognized but its very popular.

In many countries, people seem fascinated by the Jamaican dialect, but what do you as a person think of I and what do you feel in conveyed through our way of speaking that allows this fascination?
Fortunately having lived around many Jamaicans abroad so I know that not all Jamaicans speak patois. Just like not all Kenyans speak sheng’. The fascination comes from the music and Rasta films.

In closing what artiste are you looking to see perform at Sting30 and who do you feel will the next Bob Marley?
Obviously I would love to see Chronixx at Sting. I think he may be the next Jamaican artists to make major impact around the world. I think nobody can be the next Bob Marley because he will always be the King. He came, he conquered and is still on the throne, but all in all he had his time, he did his purpose. It’s a different time now. We have different battles.