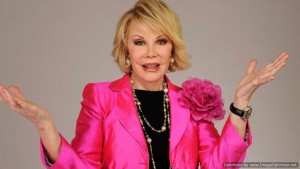 The world just got a little less funny.
Joan Rivers has died at 81.
“It is with great sadness that I announce the death of my mother, Joan Rivers,” Melissa Rivers said in a written statement today. “She passed peacefully at 1:17 p.m. surrounded by family and close friends. My son and I would like to thank the doctors, nurses, and staff of Mount Sinai Hospital for the amazing care they provided for my mother.”
Melissa Rivers added that she and her son, Cooper, who is Joan Rivers’ grandson “have found ourselves humbled by the outpouring of love, support and prayers we have received from around the world. They have been heard and appreciated. My mother’s greatest joy in life was to make people laugh. Although that is difficult to do right now, I know her final wish would be that we return to laughing soon.”
Joan Rivers, who co-hosted the popular E! TV show “Fashion Police,” had been hard at work recently, critiquing the outfits worn by stars at the MTV Video Music Awards and the Emmys with her usual acerbic wit. On Aug. 28, however, she was in New York City having surgery when she suffered cardiac arrest. She was rushed to the hospital, where she arrived unconscious and doctors kept her sedated. On Sept. 2, her daughter, Melissa Rivers, revealed that she had been placed on life support.
“My mother has been moved out of intensive care and into a private room where she is being kept comfortable,” she added in a statement the next day. “Thank you for your continued support.”
Rivers, who changed her name from “Joan Molinsky” when she entered show business, began her acting career in a play opposite Barbra Streisand before appearing on “Candid Camera.” In 1965, the future talk show host made her first appearance on “The Ed Sullivan Show.” and Johnny Carson’s “Tonight Show.”
“When I started out, a pretty girl did not go into comedy. If you saw a pretty girl walk into a nightclub, she was automatically a singer. Comedy was all white, older men,” Rivers wrote in 2012. “I didn’t even want to be a comedian. Nobody wanted to be a comedian!”
Carson became a mentor to Rivers, and eventually, in 1983, she became his permanent guest host. However, in 1986, she left to host her own competing show on Fox, “The Late Show Starring Joan Rivers,” though it only lasted a year. It also cost her friendship with Carson: After she accepted the job, the two never spoke again.
The show was also mired in personal tragedy. Rivers’ second husband, Edgar Rosenberg, the father of her only child, her daughter, Melissa, committed suicide the same year she was fired from the show. At the time, she, too, considered suicide.
“Melissa wasn’t talking to me, my career was in the toilet, I’d lost my Vegas contracts, I’d been fired from Fox,” she told the Daily Beast last month. “Carson and NBC had put out such bad publicity about me. I was a pariah. I wasn’t invited anywhere. I was a non-person. At one point, I thought, ‘What’s the point? This is stupid.’
“What saved me,” she continued, “was my dog jumped into my lap. I thought, ‘No one will take care of him.’ … I had the gun in my lap, and the dog sat on the gun. I lecture on suicide because things turn around. I tell people this is a horrible, awful dark moment, but it will change and you must know it’s going to change and you push forward. I look back and think, ‘Life is great, life goes on. It changes.'”
It did. In 1989, she launched a daytime talk show, “The Joan Rivers Show,” for which she won an Outstanding Talk Show Host Emmy. A few years later, she and Melissa began doing awards show coverage for E!, the same network that launched “Fashion Police” in 2010. In 2011, Rivers and her daughter landed their own reality TV show for WE tv, “Joan & Melissa: Joan Knows Best?” which documented the most intimate moments of their lives, including Rivers going in for plastic surgery. That same year, the comedian appeared on the series “Louie” alongside Louis C.K.
A no-holds-barred comic who found humor in the most unlikely subjects, retirement was never an option for Rivers, who claimed to think about death “constantly.” She told The Daily Beast that she wanted to be cremated and told Melissa, “Sell anything and everything you don’t want. Don’t feel beholden to my possessions.”
Rivers, the author of 12 books, also thought about what legacy she wanted to leave her only grandson, Cooper, which she told Grandparents.com was that “success comes through work.” Hers really mattered to her.
“What pleasure you feel when you’ve kept people happy for an hour and a half. They’ve forgotten their troubles. It’s great. There’s nothing like it in the world,” she wrote. “When everybody’s laughing, it’s a party.”