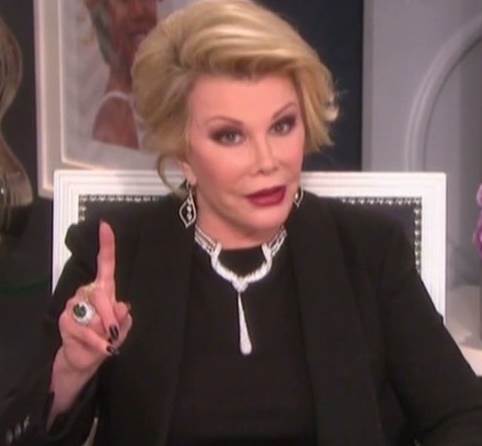 Comedian Joan Rivers is “resting comfortably” in a New York hospital after apparently suffering cardiac and respiratory arrest during a procedure at a medical clinic Thursday.
Her daughter, Melissa Rivers, issued a statement Thursday night after arriving at the hospital following a flight from Los Angeles.
“I want to thank everyone for the overwhelming love and support for my mother. She is resting comfortably and is with our family. We ask that you continue to keep her in your thoughts and prayers,” she said.
A law enforcement official told CNN that Rivers stopped breathing during throat surgery. Rivers, 81, was taken by ambulance in critical condition to Mount Sinai Hospital in New York City.
The clinic address given by a New York Fire Department spokesman is a building that houses an endoscopy clinic where doctors perform minor procedures on patients. The clinic is a mile away from the hospital.
“This morning, Joan Rivers was taken to the Mount Sinai Hospital in New York, where she is being attended to,” hospital spokesman Sid Dinsay said in a statement. “Her family wants to thank everybody for their outpouring of love and support. We will provide an update on her condition as it becomes available.”
Rivers had been scheduled to perform her comedy act at the Count Basie Theater in Red Bank, New Jersey, Friday night.
Michael Lucas, who was in the audience for Rivers’ show at New York’s Beechman Theater Wednesday night, told CNN that she joked about death.
“She said, ‘You know I’m 81 years old, and I could drop dead at any moment and you would be so lucky because you will have a story to tell your friends for the rest of your life,’” Lucas said. “Then she mimicked people talking about what it was like to see her drop dead on stage.”
Rivers was in fine form, he said. “There was no sign (Wednesday) night that she was declining. Her show was over an hour long and she never stumbled or even paused to catch her breath.”
In 2013, Rivers allowed cameras to record a health scare for her and her daughter’s reality show, “Joan & Melissa: Joan Knows Best?”
Rivers said on the show that doctors found a spot on an X-ray after she had a persistent cough.
“We’re just not going to be sad about this,” Rivers said during the episode. “We’re gonna do jokes and be up until we know. That’s how I deal with things. I’m not just gonna sit around the next couple of days and go crazy.”
Rivers has been open about her health issues. She was diagnosed with osteoporosis in 2002 after a fall down some stairs left her with broken bones, and she became an advocate for screenings for women.
She also admitted to not being as healthy as she could be.
“I try not to be, but I’m a terrible eater,” she said. “I wish I could say I eat super-healthy, but I don’t. I love junk food — it should be its own food group — so I help my bones with supplements and medicine.”