Born from Above
3 1-2 There was a man of the Pharisee sect, Nicodemus, a prominent leader among the Jews. Late one night he visited Jesus and said, “Rabbi, we all know you’re a teacher straight from God. No one could do all the God-pointing, God-revealing acts you do if God weren’t in on it.”

3 Jesus said, “You’re absolutely right. Take it from me: Unless a person is born from above, it’s not possible to see what I’m pointing to—to God’s kingdom.”

4 “How can anyone,” said Nicodemus, “be born who has already been born and grown up? You can’t re-enter your mother’s womb and be born again. What are you saying with this ‘born-from-above’ talk?”

5-6 Jesus said, “You’re not listening. Let me say it again. Unless a person submits to this original creation—the ‘wind-hovering-over-the-water’ creation, the invisible moving the visible, a baptism into a new life—it’s not possible to enter God’s kingdom. When you look at a baby, it’s just that: a body you can look at and touch. But the person who takes shape within is formed by something you can’t see and touch—the Spirit—and becomes a living spirit.

7-8 “So don’t be so surprised when I tell you that you have to be ‘born from above’—out of this world, so to speak. You know well enough how the wind blows this way and that. You hear it rustling through the trees, but you have no idea where it comes from or where it’s headed next. That’s the way it is with everyone ‘born from above’ by the wind of God, the Spirit of God.”

9 Nicodemus asked, “What do you mean by this? How does this happen?”

10-12 Jesus said, “You’re a respected teacher of Israel and you don’t know these basics? Listen carefully. I’m speaking sober truth to you. I speak only of what I know by experience; I give witness only to what I have seen with my own eyes. There is nothing secondhand here, no hearsay. Yet instead of facing the evidence and accepting it, you procrastinate with questions. If I tell you things that are plain as the hand before your face and you don’t believe me, what use is there in telling you of things you can’t see, the things of God?

13-15 “No one has ever gone up into the presence of God except the One who came down from that Presence, the Son of Man. In the same way that Moses lifted the serpent in the desert so people could have something to see and then believe, it is necessary for the Son of Man to be lifted up—and everyone who looks up to him, trusting and expectant, will gain a real life, eternal life. 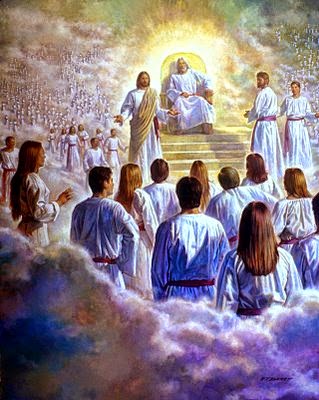 16-18 “This is how much God loved the world: He gave his Son, his one and only Son. And this is why: so that no one need be destroyed; by believing in him, anyone can have a whole and lasting life. God didn’t go to all the trouble of sending his Son merely to point an accusing finger, telling the world how bad it was. He came to help, to put the world right again. Anyone who trusts in him is acquitted; anyone who refuses to trust him has long since been under the death sentence without knowing it. And why? Because of that person’s failure to believe in the one-of-a-kind Son of God when introduced to him.

19-21 “This is the crisis we’re in: God-light streamed into the world, but men and women everywhere ran for the darkness. They went for the darkness because they were not really interested in pleasing God. Everyone who makes a practice of doing evil, addicted to denial and illusion, hates God-light and won’t come near it, fearing a painful exposure. But anyone working and living in truth and reality welcomes God-light so the work can be seen for the God-work it is.”

The Bridegroom’s Friend
22-26 After this conversation, Jesus went on with his disciples into the Judean countryside and relaxed with them there. He was also baptizing. At the same time, John was baptizing over at Aenon near Salim, where water was abundant. This was before John was thrown into jail. John’s disciples got into an argument with the establishment Jews over the nature of baptism. They came to John and said, “Rabbi, you know the one who was with you on the other side of the Jordan? The one you authorized with your witness? Well, he’s now competing with us. He’s baptizing, too, and everyone’s going to him instead of us.”

27-29 John answered, “It’s not possible for a person to succeed—I’m talking about eternal success—without heaven’s help. You yourselves were there when I made it public that I was not the Messiah but simply the one sent ahead of him to get things ready. The one who gets the bride is, by definition, the bridegroom. And the bridegroom’s friend, his ‘best man’—that’s me—in place at his side where he can hear every word, is genuinely happy. How could he be jealous when he knows that the wedding is finished and the marriage is off to a good start?

29-30 “That’s why my cup is running over. This is the assigned moment for him to move into the center, while I slip off to the sidelines.

31-33 “The One who comes from above is head and shoulders over other messengers from God. The earthborn is earthbound and speaks earth language; the heavenborn is in a league of his own. He sets out the evidence of what he saw and heard in heaven. No one wants to deal with these facts. But anyone who examines this evidence will come to stake his life on this: that God himself is the truth.

34-36 “The One that God sent speaks God’s words. And don’t think he rations out the Spirit in bits and pieces. The Father loves the Son extravagantly. He turned everything over to him so he could give it away—a lavish distribution of gifts. That is why whoever accepts and trusts the Son gets in on everything, life complete and forever! And that is also why the person who avoids and distrusts the Son is in the dark and doesn’t see life. All he experiences of God is darkness, and an angry darkness at that.”

One thought on “JOHN 3 THE MESSAGE”