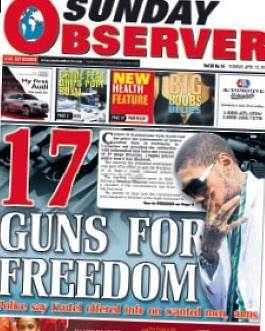 DEATH threats have been made against the lives of two journalists for their reporting on the Vybz Kartel case.
Jamaica Observer Crime/Court Desk Editor Karyl Walker and Nationwide News Network reporter/producer Abka Fitz-Henley have been identified as the reporters whose lives have been threatened.
Yesterday, Walker received several threatening calls on his cellular phone making reference to yesterday’s Sunday Observer lead story that carried no by-line.
“P…. hole, a wah dat yu write bout di man a bran him as informa; wi know weh yu live,” the first caller told Walker.
Walker calmly told the caller that the only article he had in the paper was one about problems in Port Royal.
But the caller insisted that it was Walker who wrote the story, saying that he knew his writing style.
The article quoted a source in the police high command as saying that Vybz Kartel had given information to the police that led to the recovery of 17 illegal firearms and the apprehension of several wanted men in the Portmore, St Catherine area. The police source said also that Kartel gave up the information in an effort to avoid being charged with the murder of associate Clive ‘Lizard’ Williams.
In the case of Fitz-Henley, he was threatened shortly after Nationwide aired the voice notes that were used by the prosecution in convicting the artiste and three co-accused — Shawn ‘Shawn Storm’ Campbell, Kahira Jones and Andre St John — for Williams’ murder.
In the voice notes, a man, whose voice has been attributed to Vybz Kartel could be heard issuing death threats if Williams did not recover two guns that were stolen while in his care.
The explosive voice notes were taken from Vybz Kartel’s phone. They were compiled into a 10-minute-long package with musical interludes and narrated by Fitz-Henley.
Yesterday, Nationwide boss and senior journalist Cliff Hughes confirmed the threat against Fitz-Henley.
“We have written to the commissioner of police, formally bringing it to his attention and asking him to investigate and provide the necessary guidance and protection,” Hughes told the Observer. The letter to the commissioner was sent off on Friday.
“In two instances last week after we played the voice notes from the trial, Abka got a direct call to his phone telling him to leave Kartel alone, if not all kinda things could happen to him,” Hughes said.
He added: “Last Monday morning, the security guard at our front desk received a call from a man demanding to speak with me. When he heard that I wasn’t there, he told the security guard to tell Abka to leave — and he used an expletive — Kartel alone because wi know weh him live and wi a go murder di bwoy. We don’t know if it is coming from Kartel or from exuberant supporters….”
The journalists aren’t the only ones to be threatened as a result of the Vybz Kartel matter.
Sergeant Patrick Linton, the former cybercrime boss, who gave technical evidence in the matter, had received threats and there was an attempt to firebomb his house.
The director of public prosecutions and her team who handled the case also received death threats.
The convicts were sentenced to life imprisonment with Kartel ordered to serve 35 years at hard labour before becoming eligible for parole, Campbell and Jones are to each serve 25 years before the possibility of parole, and St John is to serve 30 years before he’s eligible for parole.

0 thoughts on “JOURNALISTS RECEIVING DEATH THREATS BECAUSE OF KARTEL COVERAGE”