KINGSTON HAVE THE HIGHEST NUMBER OF CHILD ABUSE CASES 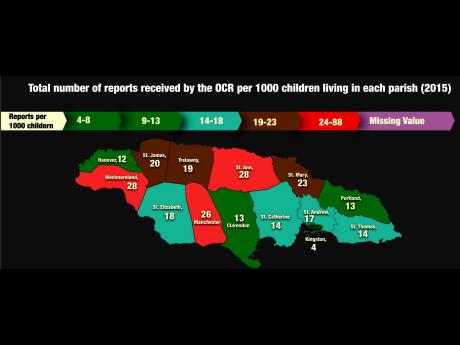 Twenty-eight of every 1,000 children in Westmoreland and St Ann have been victims of some form of abuse, making them the two parishes with the highest rates of reported child abuse across Jamaica.

But child-protection agencies are not celebrating the performance of the other parishes as they accept that the incidents of child abuse could be under-reported in those that are now below the radar, and the national average of 18 reported cases of child abuse for every 1,000 children is alarmingly high.

Data provided by the Office of the Children’s Registry (OCR) at a Gleaner Editors’ Forum last Thursday showed that Kingston and St Andrew had the most reported cases of child abuse for 2015, but these two parishes were down the line when the number of children who live in these two parishes was factored in.

The forms of abuse range from physical to s*xual and emotional, neglect, trafficking, child labour, among others.

“We are seeing increased reports in Clarendon while Manchester is showing some increase, and St Ann has become a problem for us in recent times,” head of the Child Development Agency (CDA), Rosalee Gage-Grey, told the Editors’ Forum.

“The western belt, Westmoreland, St James, Kingston and St Andrew, of course. Those are the areas in which we are seeing increases,” said Gage-Grey as she flagged St Catherine as a “heavy intake parish” for all types of abuses and egregious actions against children.

“Portmore and the Spanish Town areas see regular reports, and so we have increased the number of officers in some parishes, and in those areas of St Catherine. That’s where we do the multi-agency networking as pre-emptive measures. So those would be the hotspots and those areas take most of the agency’s resources,” added Gage-Grey.

She noted that the CDA has flagged Portland and St Thomas as parishes where the instances of child abuse would have been under-reported.

According to Gage-Grey, these two eastern parishes, as well as Trelawny, might be underserved by the children- protection agencies as the heavy terrain leave gaps in some communities.

– Data provided by the OCR