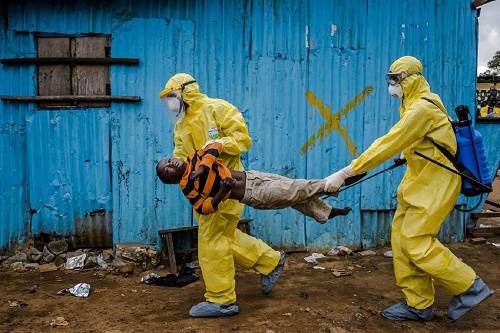 The Liberia Medicines & Health Products Regulatory Authority (LMHRA) has strongly warned pharmaceutical companies and others, who are trying to bring in “Ebola drugs/medicines,” for trial purposes, that Liberians won’t be used as Guinea pigs.
LMHRA, which released a statement yesterday, is the Government of Liberia’s arm that has the statutory mandate to review and approve all clinical trials involving medicines and health products in the country.
The Health Products Regulatory body said that “while we are seeking for all the help needed to eradicate this virus, we also want to be very careful as to what medicines are brought into the country for treatment at our various ETUs.”
In the wake of the deadly Ebola Virus Disease (EVD) outbreak in the country that has claimed the lives of thousands of Liberians and other nationals, LMHRA said many “unapproved and unlicensed medicines have begun to line up as trial treatments for Ebola virus disease (EVD) in the country. In the midst of this situation, it has become necessary that the process of clinical trials be properly guided by policies and procedures for the safeguard of the population.”
The health regulatory body said it has been forced to speak out having read in a local newspaper that a purported Ebola treatment drug, Eboflip, has arrived in the country for trial on patients at ETUs.
“Eboflip, which is said to be indicated for the treatment of the Ebola Virus Disease, has no information on its pre-clinical safety data,” LMHRA said.
Pre-clinical safety data, according to LMHRA, is when a drug has been pre-tested on a lower class animal like monkey and its data recorded before it can be tested on humans.
The LMHRA said for the Eboflip to be tested in Liberia, a “Clinical Trial Proposal” has to be submitted to it but “up to the time of this press statement, there has been no Clinical Trial Proposal submitted to the LMHRA. The LMHRA further stated that Chief Medical Officer, Dr. Bernice Dahn, whom the newspaper claims had given “authorization” for the drug trial, denied ever doing so.
The LMHRA Managing Director, Pharmacist David Sumo said: “We would like to use this medium to inform the Eurofarmacos that, there are procedures and guidelines for clinical trials that must be followed by any institution wishing to carry out any of such activities.”
Eboflip is manufactured by Eurofarmacos Group Europe, a Spanish biotechnology company.
In a release posted on the company’s website, it announced that 20 days ago, it “donated to the Government of Liberia, to carry out clinical trials of immediate form a novel anti-viral treatment against EBOLA, the ‘EBOFLIP.’”
Eurofarmacos Group Europe’s statement quotes its president, Dr. José Manuel Frias, as saying, “We don’t have the slightest doubt that, in a record time of not more than 40 days, we will make public the news of the results obtained and if they are consistent enough to ensure ultimate control of the EBOLA pandemic.”
Dr. Frias also disclosed that his company has currently prepared 30,000 treatments and has a production capacity of 500,000 monthly treatments.
“Fortunately, the news arriving from Liberia, not only affirm the effectiveness of the ‘EBOFLIP’, but they do it in just 15 days of treatment, which significantly increases the hope that this treatment if it is the solution to this pandemic, which keeps all countries of the world in check,” Said Dr. Frias
A health practitioner, who asked that his name not be mentioned, criticized the health regulatory body for playing double standard. He stated that LMHRA did not sound the same alarm when the famous ZMAPP was allegedly brought into the country without pre-clinical safety data, but was allowed to be tested on patients. One of those patients was the late Dr. Abraham Borbor, who died at the ELWA-2 ETU. This health worker also wonders whether the LMHRA has the technology to determine if the drug is fit for human consumption.