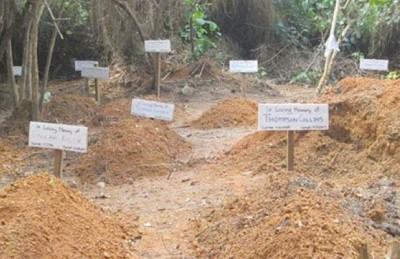 Traditional leaders in Bong County have denounced the cremation of Ebola dead on ground that it is conflicting to the cultural norms and traditional practices of the country.
In an interview with the Daily Observer over the weekend, the Chief Elder of Bong County Moses Suakollie said incinerating the lifeless does not demonstrate love for the dead.
Mr. Suakollie told this reporter that their posture to censure the cremation is largely due to their tradition and customs as people of the Kpelle tribe.
“The ancestors will not accept their souls because they were burnt by fire and furthermore, it is not our teaching as Kpelle people” Mr. Suakollie stressed.
The Chief Elder further described cremation as dehumanizing and losing the value of the existing culture.
At a recent forum organized by the Cater Center in collaboration with the Ministry of Internal Affairs and National Traditional Council of Liberia, traditional leaders, who gathered in Gbarnga, rejected the act of cremation for Ebola dead.
The act of cremation for Ebola dead is mainly taking place in Monsterrado County. The practice will definitely disallow family members locating the burial sites of their deceased relatives, but for Bong County the story is different, Ebola dead are being buried. No cremation is taking place in the county.
Our reporter was taken on a guarded tour of the grave site of people who have already succumbed to the virus but will have a place to be remembered by their relatives.
His tour was guarded by the Program Coordinator of the International Medical Corps (IMC), Sambhavi Cheemalapati.
It was established that each grave bears a clear identity – the name of the deceased person written and placed at the top of the grave.
It is now a little over a month since the IMC, a US based medical charity took over the management of the Bong County ETU.
Madam Cheemalapati informed this reporter that her institution has registered 31 deaths at the Unit since it opened in September of this year.
The US$170,000 facility was constructed by Save the Children International as part its support to the ongoing fight against the hemorrhagic fever in the country.
Formal turning over ceremony of the ETU to the Government of Liberia through the Bong County Health Team was held on September 10, 2014.
The facility with all indications is fully functional with both local and expatriate health workers collaborating their efforts to brawl the human killer disease from this part of the country.
Our reporter was also informed by the IMC Program Coordinator that additional graves are prepared in order to enhance the work of the burial team at the ETU.