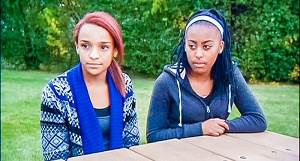 Officials at an Illinois school said this week that a substitute teacher would not be allowed to work in the school after she allegedly called two students the N-word because they objected to being called African-American.
Eighth graders Mea Thompson and Zaria Daniel told WMAQ that they were working in a Social Studies group with two other students at Jay Stream Middle School last Wednesday when the substitute teacher referred to them as “African-American.”
“All four of us that were sitting there got offended because none of us are from Africa,” Thompson recalled. I’m Jamaican. So we said, ‘Can you please not call us that?’”
“She continued to call us that and said, ‘It’s the politically correct term.’ Then she said, ‘Well, back then you guys would be considered the N-word.”
Thompson and Daniel said they were almost moved to tears by the teacher’s words.
“We were so shocked and we were like, ‘What? Excuse me?’” Thompson replied. “She was like, ‘Well, back then that’s what African-Americans were called.’”
The students said that the teacher continued to use the N-word throughout the 80-minute class period. They said that she also referred to them as slaves.
One student reportedly left the room crying.
The school district confirmed to WMAQ on Tuesday that the substitute teacher had been interviewed, and that she had corroborated the students’ version of events. A spokesperson for the district told the station that woman would not be asked to work at the school again.
Thompson’s mother, Shayna, planned to go to the Carol Stream Police Department on Tuesday to file a report, and to find out if the teacher could be charged with disorderly conduct or a hate crime.
“After the shock and hurt, I’m angry,” she said. “It’s a new world, and the people of the past that still hang onto hatred and bigotry don’t belong in this world anymore.”