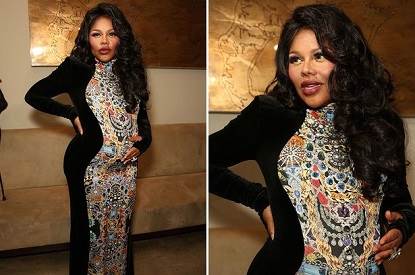 Lil’ Kim will no longer be the littlest one in her home.

The 39-year-old rapper has revealed she is expecting her first child and she can’t wait to be a mother to her lil’ one when it arrives.

Magic Stick hitmaker Kim sparked speculation she was pregnant when she turned up at New York Fashion Week earlier this week sporting a huge baby bump beneath her clinging dress.

She then took to the stage at the Blonds Fashion Week after party in New York to sing Lighters Up, which she dedicated to the late Notorious B.I.G.

“It’s also going to be Biggie’s birthday and the anniversary of his death soon so we [as she points to her belly] love you,” she announced to the crowd in typical understated style.

However, the brunette beauty – who enjoys an ongoing feud with Nicki Minaj – is showing no signs of slowing down and is adamant the baby won’t stop her working.

Lil’ Kim hasn’t revealed the identity of the father, but she was last romantically linked to professional boxer Floyd Mayweather, 36, and the pair were still dating last September.