LYING IN THE NAME OF GAYNESS 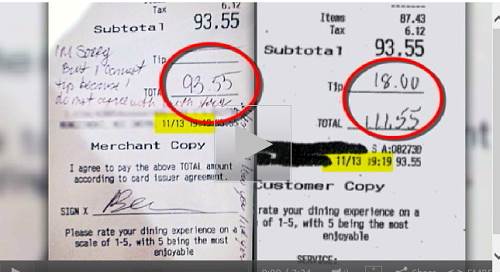 When Dayna Morales, a restaurant server in New Jersey and former U.S. Marine, claimed a family wrote her a hateful note on a receipt, outrage ensued.

“I’m sorry but I cannot tip because I do not agree with your lifestyle and how you live your life,” read the note. Morales, who is gay, posted a photo of the receipt on Facebook.

Morales went on news programs and showed off the receipt with the message. But now, a family has come forward saying it left no note and did leave the waitress a tip. The note, it claims, is a fake, according to NBC New York.

The message on the tip reads in part, “I’m sorry but I cannot tip because I don’t agree with your lifestyle.”
The family, which wished to remain anonymous, told NBC New York it left Morales a $18 tip. It reportedly provided a copy of the receipt as proof as well as a credit card statement “which appears to indicate their card was charged for the meal plus the tip, for a total of $111.55.”

The wife told NBC New York that she is left-handed and couldn’t have made the slash in the tip section of the receipt. She says it appears like it was made from the right.

“We’ve never not left a tip when someone gave good service, and we would never leave a note like that,” the wife told NBC New York.

The husband said he didn’t vote for Chris Christie because of the governor’s lack of support for gay marriage.

“Never would a message like that come from us,” he said.

Faking a note, he added, is “a disgusting thing to do.”

Morales told NBC New York that she didn’t receive a tip and repeated that the handwriting on the tip was not hers. The restaurant told NBC New York it is conducting an internal investigation into the incident.

0 thoughts on “LYING IN THE NAME OF GAYNESS”