Duston Holloway, 23, from Texas arrived home one evening to find his beloved girlfriend, lying drunk in bed with another man. He couldn’t believe his eyes, the heartbreak was unimaginable but instead of reacting by shouting or fighting like other men might do, he rather carried out sweet revenge, by taking selfies with the sleeping pair and posted it online.
He posted the pictures on his Facebook with the caption: “When you come home to another man in your bed with the one you loved! Good men deserve good women.” 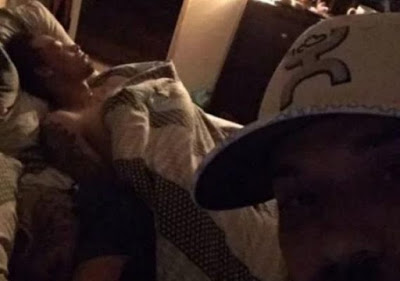 The photos elicited good reactions from his followers especially women who praised him for his actions, and told him that he’ll get the right woman who will love him and value him dearly.
Duston also revealed on Facebook that he wanted to “kick” the stranger’s “a**” but decided to act as a boss.
“But I calmly just took selfies and walked like a boss lol. I did tap her to wake her up but she was drunk as a skunk passed out.
“I was gonna ask if I was gonna have to sleep in the spare bedroom and what kinda breakfast the dude liked lmao.”