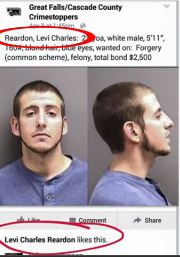 Sheriff’s deputies in Cascade County, Montana, say they arrested a man wanted on felony forgery charges after he liked his own wanted poster featured on its Crime Stoppers Facebook page.

The Great Falls/Cascade County Crimestoppers Facebook page featured his photo in April as a “most wanted suspect.

Reardon was then tracked down and arrested without incident.

After the arrest, Crimestoppers posted an updated photo with the arrest date and bond amount.

And while Reardon wasn’t among the more than 100 people who liked that new photo, there’s still plenty of entertainment in the comments section. Mostly from Crimestoppers who keeps having to leave replies like “yes, it’s true” “it’s very true”

0 thoughts on “MAN LIKES HIS OWN MUGSHOT ON FACEBOOK”