A handcart operator who was arrested for stealing a bag of Irish potatoes almost six years ago claimed he found it when he appeared in the Kingston and St Andrew Parish Court last week.

Christopher McIntosh was arrested and charged with simple larceny following allegations that he stole the bag of produce, valued at $2,700, in September 2011.

However, he did not show up for his court appearance at the time, hence a bench warrant was issued for his arrest, which was recently executed.

Last Thursday when McIntosh appeared in court before Senior Parish Judge Andrea Pettigrew-Collins he pleaded guilty, but claimed he found the goods while working in Coronation Market. 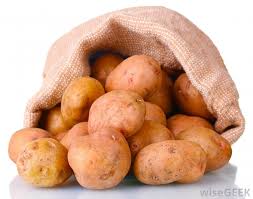 But the judge was far from convinced

“Do I look like I am stupid to to you?” Judge Pettigrew-Collins asked.

“How come you so lucky to find such a thing of value?” she continued.

McIntosh attempted to answer, but she quickly told him to be quiet.

“I don’t know how you find a bag of potato; you’re so lucky to find an entire bag of potato,” the judge told McIntosh before handing down the sentence of an $8,000 fine or 15 days in prison.