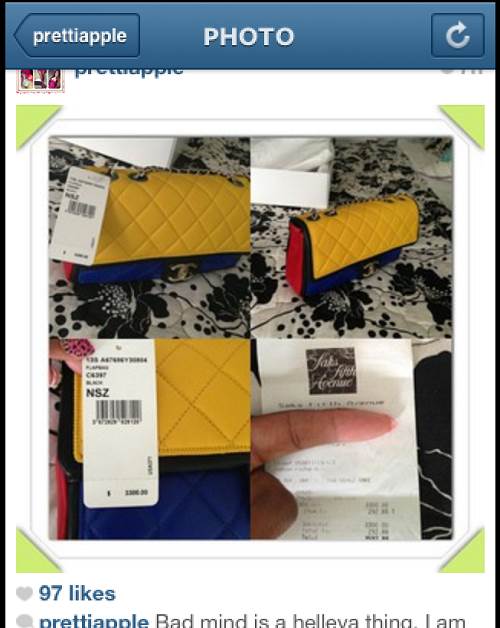 MY NAME IS SEH :-
MY NAME IS….
Submitted on 2013/06/26 at 9:40 pm
Ok…here we go. I have not seen the receipt ms. lady put up because I am not on her IG but as I said before I could care less about any receipt the bag is simply not authentic. I understand that Apple is a credit card scammer, a fraud, and a con artist. The art of the con is always to mix a little truth with a lot of lies or in her case a little real with a lot of fake. Her man says there are levels to this shit and there sure are….unfortunately they are on the ground floor. .
Now the thing about the internet is that you never know who is on the other side of the keyboard. I never called out the pink bag she posted because quite frankly based on that photo I can’t be sure if its authentic or not so I’ll let her be great and say that it is. It has nothing to do with the receipt. Receipts are just another tool in the arsenal of scammers.
The graphic flap bag however I do know quite a bit about. Apple you post up Brandon business card like that means anything. The luxury world is quite small (remember that for your scamming files) and I actually bought bags from Brandon when she used to work at the Bal Harbour store back in 2007… when you were still perfecting the art of squatting over a pit toilet. Ghetto girl you can’t talk to me because Chanel is not new to me. If you want a great SA to work with at the Hermes store let me know cause um yeah there are levels to the shit…
Now on to the bag. You say you bought the bag at Saks. Saks only ordered 37 graphic flap bags in that color combination for the Manhattan store. All 37 bags were accounted for my the end of March/early April. The bag was sold out. Do you know what sold out means. There was no more waiting list… All of the inventory was sold and the bag was no longer being produced by Chanel. All of these bags were SOLD. The same is true for the Chanel store in Soho. Anyone can call them and verify what I’m saying.
So Apple even if we were to put aside the fact that the bag has obvious flaws marking it as a fake….do you expect us to believe that of all the prominent people in New York….celebrities, business people, socialites, etc….YOU happen to be one of the lucky 37 people to get this bag from Saks in Manhattan, and somehow YOU were able to get them to find you this bag a full month after it was SOLD OUT EVERYWHERE AND NO LONGER IN PRODUCTION???There were only 37 bags of this type reserved for that store….you could not have been on the list and still looking for the bag in May when they were sold out in late March early April.
Even if we were crazy enough to believe that you expect people to believe that once you got this prized bag in May as you say YOU being the attention whore that you appear to be did not immediately post it to IG but held it for a full month and posted it as a birthday gift to yourself a month later????
Bish…get your life cause don’t nobody believe that bullshit. You can take those dirty dancehall clowns for fools but its not only dancehall people that come on this board. I don’t care how many receipts you post, I don’t care that bag is not real. Its clearly “defective” and the timeline that you posted that you got this bag is simply not possible.
OH AND SORRY…HERE IS THE FRIEND ON THE VEGAS TRIP 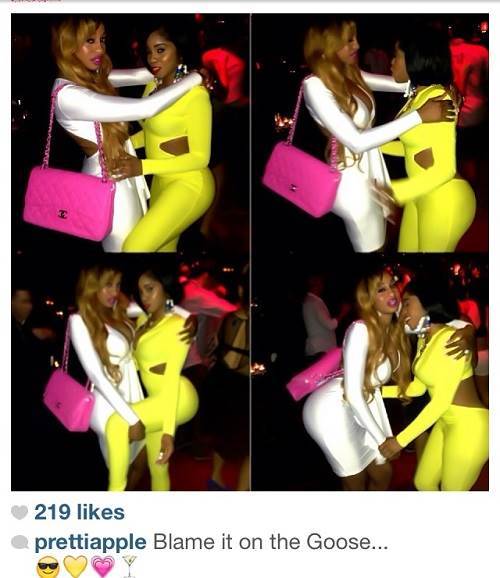