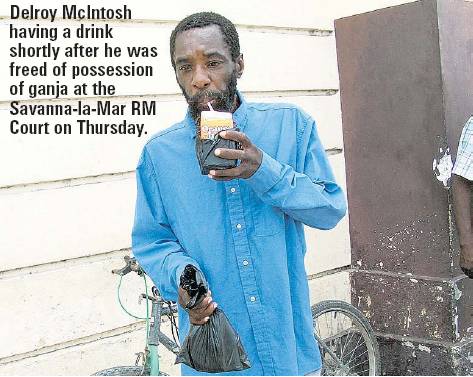 SAVANNA-LA-MAR, Westmoreland — It was an emotional reunion for a mentally challenged man, 51-year-old Delroy McIntosh and his family after he was freed in the Savanna-la-Mar RM Court on Thursday, almost 25 years after being jailed while awaiting trial for possession of a small quantity of ganja.

Tears flowed freely down the cheeks of Artman McIntosh, father of the man of unsound mind, as he recounted the eventful day of June 23, 1990, when the police took away his son from their district in Friendship to arrest him for possession of “less than a ganja spliff”.

Since that time, he was only seeing his offspring for the first time on Thursday.

“For over 25 years is the first me a see him,” a relieved father said.

Letford McIntosh, who concurred with his brother, added that his nephew was arrested after the police were called to remove him from an unoccupied house in Friendship. He explained that the police, upon arrival, took his nephew into custody for possession of ganja.

“He was arrested in his community by the Savanna-la-Mar police. Somebody called the police because he was a bit mental. So there was a house in front of his house and it was an empty house, so he went inside the house. When the police came they saw some ganja mash around him, not even a real spliff, because he was a bit mental at the time, and the police took him and put a charge on him and that was it. We never see him again; this (Thursday) is the first for 25 years,” the delighted uncle revealed.

Both brothers reflected that twice they journeyed from Westmoreland to visit their kin in prison, but were unsuccessful on both occasions. Once they were told by prison officials that the whereabouts of their jailed relative was unknown, while another time they were refused entry onto the property of the jail.

“One time me go there (prison) them say is not visiting time. A rent we rent car, you know,” the father said.

“When him deh a St Catherine me go deh, me can’t find him, them say them don’t know him.”

In fact, the father of the mentally disturbed man alleged that the police reneged on a promise to return his son to Westmoreland to face the Court.

“Me go over the station, them give me a letter to give to the clerk of court. Me carry the letter come give him. Them say when them sending up there for anybody them will send him down; up to now them don’t carry him down. First me see him for 25 years,” the father related to Jamaica Observer, breaking down in tears.

“When him get mad is over 20 years me have to deh pon tablet.”

At the time there was an undertaking that he would be returned to court in Westmoreland when he was fit to answer to the charge.

But he languished in the penal institutions for half of his life until his matter was stumbled upon by Norman Manley Law School tutor Nancy Anderson and a group of second-year law students, who were undertaking a project at the Tower Street penal institution.

“We have a project at the law school where we have been going to Tower Street to see if we can assist with the mentally ill that are incarcerated there,” Anderson told the Sunday Observer.

“One day we found out about the information, and we were just startled that he is charged with possession of ganja and we are looking at him 24 years and some months later, still incarcerated.”

This spurred the group of law students and their tutor into action. Anderson reflected that contact was made with the Savanna- la-Mar Resident Magistrate’s Court.

“We wrote to the court here, the court wrote back saying that the information they have is that in June in 1990 he (McIntosh) was sent to St Catherine Adult Correctional Centre to remain there until fit to plea. Now the problem in the correctional centres is that they don’t have full-time psychiatrists. And, also, basically a prison is not a place for treatment of mental illness. Mental illness is not a crime that should be punished, it is a sickness… an illness that should be treated with the proper medical treatment,” observed Anderson.

She was successful in getting the accused to have his say before the court on Thursday, where he pleaded guilty and was ordered released by Resident Magistrate John Thyme who presided over the matter.

The magistrate was informed by the prosecution that no file for the matter could be found. The accused, who shivered uncontrollably throughout the sitting, pleaded not guilty.

“No! No ganja!” McIntosh emphatically pleaded.

“The judge was told that there was no file, no evidence you have to get a certificate to say that some vegetable matter is ganja, no certificate, no nothing. I explained to the judge the background and the Crown said they were offering no evidence, but they pleaded him first. I didn’t want that to happen, I didn’t think that was necessary, because they have no evidence,” Anderson said.

When news of the outcome of the case broke, a small gathering which encircled the freed man and family members decried what they saw as an unjust system.

Words of sympathy poured freely for the released McIntosh who spoke little, but who blurted out that he was famished.

When the light meal was brought to the violently trembling man, each time he attempted to drink, the liquid splashed uncontrollably over him as his shaking hands could not steady the box container.

Upon learning of the mentally challenged man’s situation, Derrick Wright, one member of the throng, wept openly.

“Is the first me a see him but we are human, man. We have a heart,” bemoaned Wright, who failed in his efforts to choke back the tears.

Anderson said that there could be similar cases as McIntosh’s existing in local prisons.

“I hope there are none with such extreme length of time, but there are others that are there. We are dealing with them, but it is a very slow process. You can’t just get them before the court to release them. Suppose we had done that today and no family was here? We have to contact the family, we have to contact the psychiatrist in the region, and we have contact with Dr Crossmann at the Cornwall Regional Hospital; she sent someone from the mental health team here so that they know about it,” Anderson explained.

“There is a lot of ground work to be done. It’s not just getting them before the court and getting them released. So we are dealing with it one by one.”

Before McIntosh was taken home to be with his family, he was whisked away in a vehicle driven by Yatana Hemmings, western regional mental health officer, for treatment at the Savanna-la-Mar Public General Hospital.

Family members had high praise for Anderson, who was accompanied to the Savanna-la-Mar RM court with two of her second-year law students involved in the project — Yumika Harris and Zandragay Francis.

The two students were happy to have made a difference in the life of the mentally challenged man.

“The project is geared towards second-year law students at the Norman Manley Law School legal aid project. When Miss Anderson approached me I decided to take it up because I knew it would be a good gesture. I wanted to get exposure so I took it. It feels very good to know that you can help somebody,” Harris said.

For Francis, the outcome of Thursday’s matter was fulfilling.

“This project is one in which we are exposed to constitutional matters. Its not just about the book work, but what is happening and helping persons to enforce their constitutional rights. So its a good project, its one that the law school will continue, hopefully. Its a part of our legal aid, going out into the field, applying the practicality of what we are learning, and we see it being in effect today,” Francis argued.

102 Users Online
Back to top