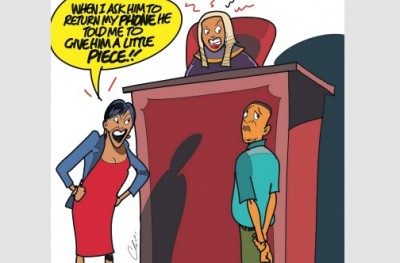 A mentally challenged man who was ruled fit to plead was remanded for further psychiatric evaluation after he again accused the complainant, whom he had attacked, of watching him with a software bug.

Omar Davidson was arrested and charged with common assault and assault at common law after he saw the complainant in the square at Lawrence Tavern in St Andrew and poked her in her face and tried to hit her with a stone.

He attacked the complainant after telling her: “Hey; you a bug me out. Mi a watch you a mek money offa mi; you a watch mi pon computer.”

Davidson had also threatened to kill the complainant whom he has been plaguing for over three years.

On the last occasion when the case was mentioned in April, Davidson sparked laughter in the court when he said he attacked the complainant because she had a software bug watching him.

“Yes, she has a software bug watching me — a Microsoft software bug. You can google it,” Kingston 11 resident Omar Davidson had said, to laughter.

On Friday when Davidson returned to court he appeared to be in full control of his faculties and when he was pleaded said that he was guilty.

But immediately after pleading, Davidson said: “She have a software bug watching me. Please google it and you will know what I am talking bout.”

However, as a result of Davidson’s utterances, Parish Judge Chester Crook ruled that he should be further remanded for psychiatric evaluation as his explanation shows that he still requires treatment, despite the doctor’s assessment that he was fit to plea.

Davidson, however, maintained he was ok by uttering: “Doctor say mi fit to plead.”

He was subsequently remanded and is to return to court on July 27.