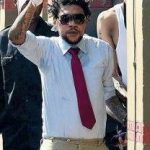 THE main witness in the Vybz Kartel murder trial yesterday attributed voice notes threatening death against himself and Clive ‘Lizard’ Williams over two missing ‘shoes’ as those of the popular entertainer. The witness also attributed voices heard on a video to Vybz Kartel and co-accused Shane Williams.

The evidence came on a day that saw the number 11 juror being released from the 12-panel jury due to “personal reasons”. In releasing the juror following the luncheon adjournment, Justice Lennox Campbell thanked her for her service before proceeding with the trial with the remaining jurors.

During the morning session of the hearing in the Home Circuit Court, 22 voice notes were played for the witness — most filled with threats about killing ‘Lizard’ and other men if the ‘shoes’ were not returned on the evening of August 14, 2011, two days before Williams was allegedly killed over the disappearance of two illegal guns.

The witness, who testified that he knew the entertainer for six years, identified the voice as Kartel’s. He explained, under questioning from Justice Lennox Campbell, that ‘shoes’ meant gun.

No faces could be seen in the video, but the witness identified the voice on it asking if “this can kill him” as Kartel’s.

However, during the afternoon session attorney Tom Tavares-Finson, who appears for Vybz Kartel, and attorney Everton Dewar (Shane Williams’ attorney) attacked the witness on the issue of voice identification.

“How you know that?” Tavares-Finson asked, to which the witness responded, “Me know them, sir.”

Similarly, Dewar attacked the witness, telling him that he had never spoken to Sean Williams before. But the witness said he had. At this point, Justice Campbell intervened in the questioning, as he often does throughout the trial, to pose his own questions. In response, the witness said that Clive Williams and Shane Williams would often talk and that he would interject during the conversations.

“You are telling this court that one of the voices you heard is Shane Williams’?” Dewar asked.

Dewar solicited laughter from the jurors and others attending the proceedings when he told the witness, “You can look at me enuh. I know I’m not beautiful, but you can look at me.” The witness looked at Dewar and smiled before assuming his usual posture.

The witness denied a later suggestion that the voice he heard on the video didn’t belong to Williams.

Vybz Kartel, whose real name is Adijah Palmer; Shawn Campbell, popularly known as ‘Shawn Storm’; André St John; Williams; and Kahira Jones have been on trial since last November. The body of Clive Williams has not been found.

Yesterday, during the morning session, senior prosecutor Jeremy Taylor showed the witness a picture of individuals whom he described as Vybz Kartel, St John, Shane Williams and other men who are not before the court.

The witness had given evidence prior to yesterday that he was at Vybz Kartel’s Havendale, St Andrew home when Clive Williams was being beaten and that he (the witness) ran from the house.

“In the letter you indicated that you were here by virtue of force by the police,” Tavares-Finson said.

“No, sir,” the witness retorted.

He denied a further suggestion that he wrote to the public defender saying that he “didn’t want to continue with the police’s design to convict these men”. He also denied that he wrote that he saw Clive Williams after the night of August 16, 2011 and that he did not give his statement to the police freely.

Under cross-examination from attorney Michael Lorne, who is representing Campbell, the witness said that he heard the name Shawn in the video that was played.

“What did you hear in relation to Shawn?” the attorney asked. “I just heard the name Shawn and it cut off,” the witness responded.

Attorney Pierre Rogers, who represents Jones, asked the witness when he first saw the pictures he was shown in court and he said it was during a hearing outside the presence of jurors in court last year. Asked if the police had shown him the pictures, he said, “Nobody neva show me them before.”

The trial continues on Monday with Rogers’ continued examination of the witness.