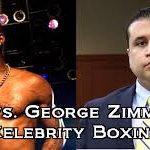 In his quest to remain relevant against all evidence to the contrary, George Zimmerman has announced plans to battle DMX, onetime king of hardcore rap turned recovering drug addict. Instead of battling beats and rhymes; they’ll be battling each other. With their fists. As in a “celebrity” boxing match. For “charity”.

Welcome to the world of 21st Century gladiators, where virtually any spectacle is acceptable as long as it rakes in big crowds and bigger bucks – the bloodier, the more outrageous, the more offensive, the better.

In one corner, you’ve got Zimmerman, who says that even before “the incident” – that would be that time he killed Trayvon Martin two years ago – he’d been doing “boxing-type training for weight loss” and is therefore really ready to lace up his gloves. And in the other corner, you’ve got DMX, whose most memorable work of late was performing an impromptu Christmas rap for Rudolph.

Actually, the Rudolph rap, performed during a radio appearance, was all kinds of awesome. The purported celebrity boxing match, on the other hand, is just plain awful.

Zimmerman killed someone. Regardless of where you may fall on the justified/not justified spectrum, there’s no getting around the fact that he pulled the trigger, and because of that, someone died. An unarmed 17-year-old will never go to college, grow into manhood, nurture a career, raise a family.

That’s not something that you celebrate. Killing a kid – and escaping conviction for it – shouldn’t be part of anyone’s get-rich-quick scheme.

And from the start, rather than showing any kind of remorse, Zimmerman has used his notoriety to make a buck, from raising $200,000 on his website to pay for his defense/living expenses to selling his paintings for six figures on Ebay. (One art critic dubbed his work “murderabilia.”) Granted, it’s got to be hard for Zimmerman to hold down a regular job these days, what with his high-profile arrest for domestic violence (charges were later dropped). But Zimmerman’s boxing match is the equivalent of throwing a rave on Trayvon’s grave.

Surprisingly, ever since Zimmerman agreed to fight for promoter Damon Feldman’s Celebrity Boxing, a number of “celebrities” from Chyna to Linsdey Lohan’s dad to The Game, have tossed their chapeaus into the ring, eager to go a few rounds with the one-time security guard. Guess they all subscribe to the any-publicity-is good-publicity philosophy – this is, after all, catnip for the TMZ set. Over 15,000 people reportedly emailed their requests to take on Zimmerman, but DMX was ultimately selected. Why was he chosen? “He’s a controversial guy,” Feldman said in an interview.

As for DMX, what is he thinking? To hear him tell it, it’s revenge, for “any black person who’s been done wrong in the system”. He’s announced, enthusiastically, that he’s “going to beat the living f**k out him … I am breaking every rule in boxing to make sure I f**k him right up.” Clearly, there are a lot more productive ways to fight the system without actually resorting to … fighting.

Of course, this might be a whole lot of sturm und drang over nothing. DMX, whose bankruptcy petition was rejected by a New York judge last year – he owes $1.3m in child support – has started back pedaling a bit, pointing out that he hasn’t signed anything as of yet, and before he steps into the ring, he wants to talk money first.

0 thoughts on “DMX VS ZIMMERMAN- DISGRACE”