The decomposing bodies of Anika Gabriel and her baby were found on a bed at their South Oropouche home by the baby’s father yesterday morning. Three and a half month old Sydney was embraced in her mother’s arm as they lay on the bed in what police suspect was a murder/suicide.

“Why, she do this,” cried Wayne Phillander, 42, the baby’s father, who made the horrible discovery after a foul stench and the buzzing sound of flies coming from inside the family’s small wooden house caused him to peep through a window.

When the police arrived at the Ralph Narine Trace house they had to break open the front door because it was locked. Police said there appeared to be no signs of forced entry. The house, a ten by ten structure, has no electricity or running water.

Gabriel, 30, who has six other children from previous relationships, left Phillander’s home in Rousillac shortly after the baby was born on March 22 and moved into the house at South Oropouche. 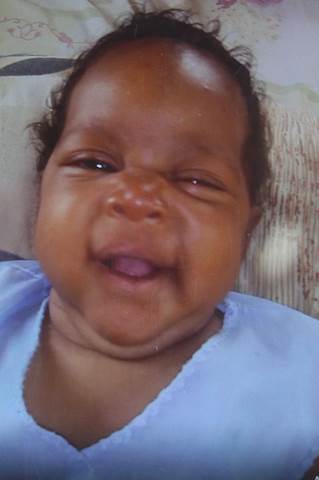 As tears ran down his checks at his Rumstill Avenue home yesterday, a barely audible Phillander said he initially thought the stench was an animal carcass under a tarpaulin near the house.

Saying it never crossed his mind that the smell was the decaying bodies of his baby girl and her mother, he said, “I don’t know why she do this. She could ah leave the child with me.”

Phillander, who has a 21-year-old son from a previous relationship, said he had been in a rocky relationship with Gabriel for about five to eight years, during which time they had broken up several times. Three weeks ago, he claimed Gabriel made a false report to the police that he had kicked and choked her. He said he was charged and granted $100,000 bail by a Siparia magistrate. He said Gabriel also took out a restraining order against him.

Phillander said he would send his brother with milk and pampers for the baby, since the order prevented him from seeing his daughter. He claimed Gabriel, who was not working, subsequently apologised to him for making the false report against him. Recalling his last conversation with Gabriel on Thursday, he said she asked him for a $10 phone card which he sent for her. He said he was missing his daughter, so he asked Gabriel to spend the entire day with Sydney yesterday and she agreed.

Recalling the gruesome discovery, Phillander, a labourer at the Siparia Regional Corporation, said after work he passed by the house.

“When I gone I smelling some thing stink and it had sour flies. Well I say is a dog drag something under the tarpaulin. The house was lock up, I don’t have a key for there.”

Phillander said he also thought Gabriel, who was not answering her phone, was not home.

“I find it funny I hearing one set of flies in the house.” He said he went to the back of the house, climbed up on a brick, peeped through a louvre and pulled the curtain.

“All I see is she (Gabriel) swell up. I could not see the child. When I see that I know is death. I come to spend the day with my child, not to see death.” He said the police told him Gabriel was lying on her right side and hugging Sydney against her body with the other hand. A mosquito net was over them.

Phillander said Gabriel was quiet person, but she had a bad temper. He recalled that while she was pregnant she picked up a cutlass and begged him to kill the baby inside her. However, after the baby was born he said she never exhibited any kind of hostility or violence towards the baby.

“I never think she would ah do something like this. I don’t know why she do this and the child innocent. Better she did call me and say come and take the child. I real love my daughter.”

Phillander said he had planned to christen his daughter later this month. He said three of Gabriel’s children live with their father and the three others live with Gabriel’s adopted sister. He said built he the house Gabriel was living in, but the structure was incomplete. Despite this, he said Gabriel moved into the house with his daughter and refused to leave.

Also expressing shock over the incident was Phillander’s father Rudolph, who said Gabriel could have left the baby with them to care.

Rudolph, a father of 15 and grandfather of 20, said he had only seen Sydney twice since she was born. Last August, the decomposing body of Gabriel’s mother, Jenelle, 43, was found in a shack at Agard Road, Point Fortin. An autopsy found she died from natural causes. Some of Gabriel’s relatives in Rousillac said they were not close to her and could provide no information about her.

When T&T Guardian visited the scene yesterday, the closest neighbour to Gabriel said he did not know her because she kept to herself.

Investigators from Oropouche Police Station and Homicide Bureau visited the area and the house was cordoned off. A district medical officer viewed the bodies and ordered their removal. The autopsies are expected to be performed today at the Forensic Sciences Centre, St James, to determine the cause of death. Investigations are continuing.

Meanwhile, in an unrelated incident, an autopsy is expected to be conducted today on the body of two-year-old Diana Maraj.

Baby Diana was last seen alive on Monday around 11 pm when she was put to sleep by relatives at her Guaico Tamana, Sangre Grande home. However, she was discovered unresponsive in her bed on Tuesday around 5 am. Relatives immediately notified the EHS, who arrived and took her to the Sangre Grande Hospital.

4 thoughts on “MOM KILLS SELF AND THREE MONTH OLD (TRINIDAD)”