MORE DAN JUDGEMENT IN JAIL..SHAME ON THE JAMAICAN GOVERNMENT 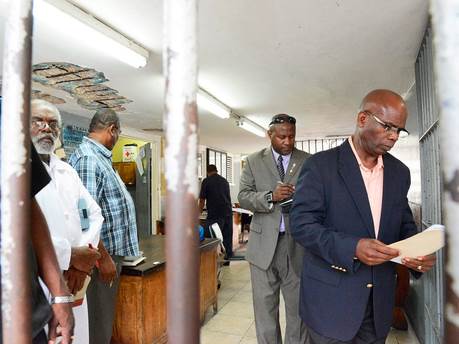 Filthy and inhumane conditions have forced the shutdown of two police lock-ups in the Corporate Area, and a third could be ordered closed if the health department acts decisively.

“As we speak, the Hunts Bay police lock-up and the Denham Town police lock-up are out of use, and the resources are just not enough to do everything at once,” Assistant Commissioner of Police George Quallo told The Sunday Gleaner last week.

“The Hunts Bay lock-up had some defects, but the primary reason for the shutdown was because of ventilation problems. I can’t tell you much about what’s happening at Denham Town (lock-up) but I know work is ongoing at Hunts Bay as we speak, and both facilities will be completed soon.

“There is no way we could close down all our lock-ups … I am aware that there are serious problems at the Central Police Station lock-up, but we will have to address it through a process, and it will be addressed as soon as possible,” added Quallo.

He was speaking following a tour of the lock-up at the Central Police Station where a scene of muck, slime and horror greeted Custos of Kingston Steadman Fuller, along with representatives of the Public Health Department.

Several scandal bags, which according to inmates are used as substitutes for toilet facilities, lined the grilles and walls of the building, adding to the foul stench that lingered, as the team made its way to the different cells with little or no light.

And the creepy crawlers did not escape the attention of those present, as the rodents occupied every crevice and corner of the facility.

“Right now mi caa hear out of one ear, because a roach stuck in deh and all now mi nuh see a doctor,” said one inmate, pointing to a stub of tissue he placed inside an ear, in a bid to ease the pain.

“Wi very sick in here! About three weeks now mi a feel pain, pure bumps over mi skin,” another inmate shouted as he tried to avoid touching the wet, slimy floor with his feet.

As The Sunday Gleaner team attempted to visit the other cell blocks at the lock-up, several cops interrupted, asking the news team to leave, fuming that protocols were breached.

As a result, the news team had to wait outside until the tour was finished.

Major Clifton Lumsden, chairman of the lock-up visitation committee of the Kingston branch of the Lay Magistrates’ Association, who was also part of the team, described the experience as traumatic.

“The first time I went, I was shocked!” he exclaimed.

“If we were talking about convicts probably there could be some understanding, but these are people who are detained or awaiting a charge … . So in other words, the presumption of innocence is still at play here,” declared Lumsden.

“It is not our intention to cause any unwanted alarm, all we are saying is, a man’s constitutional right must be maintained, and there has to be some dignity in that process. In my capacity, I have visited many lock-ups and this is the worst I have seen.”

Fuller also expressed his distress, saying that he has had consultations with persons in authority on several occasions but nothing has been done to remedy the malady that exists at the lock-up.

“Every time I come here I get distressed. My greatest fear is that there will be an epidemic outbreak, because it is highly possible under these conditions. At least three inmates told me that they had roaches crawling in their faces, and the filth is just unbearable,” he declared.

For Quallo, the fix needed at the Central police lock-up is a challenging process.

“I was briefed by the custos on the conditions, and I also received reports at different intervals. We are in discussions, and I reassure persons that the issue will be addressed,” said Quallo.

The public inspector, who toured the facility, said he was unable to comment on the matter.

He referred the news team to the chief public health inspector for Kingston and St Andrew, Everton Baker.

However, when contacted, Baker said the South East Regional Health Authority (SERHA) should be contacted for a response.

Efforts to get a comment from SERHA were unsuccessful, as up to press time there was no response to an email sent.

0 thoughts on “MORE DAN JUDGEMENT IN JAIL..SHAME ON THE JAMAICAN GOVERNMENT”