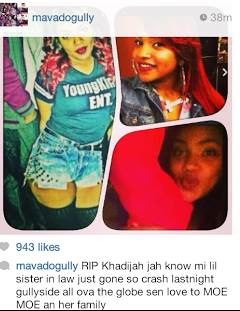 For weeks, said her sister Sapphire Lumley, McKenzie had talked up how that was to be her first day of work at a new job with the U.S. Postal Service.

She’d gone out Friday night to celebrate with friends, and in the early morning hours Saturday, her life was cut short in a wrong-way crash on Interstate 490 near Ames Street.

State Police say 30-year-old Robert Rector of Fairport was drunk and driving his pickup eastbound in the westbound lanes of the highway when he plowed into and toppled McKenzie’s sport utility vehicle. She was pronounced dead at Strong Memorial Hospital.

At her home on Firestone Drive in Gates, family and friends gathered Saturday afternoon to grieve.

“Khadijah just loved to cook, she was so much fun, she loved to go out, she was an artist and she loved candles,” said Sapphire, 13, an eighth-grader in the Gates Chili school district. “She was my best friend. Someone I looked up to and played with, and she wouldn’t ever let anyone hurt me; a mother figure, and losing her tore everybody apart.”

She said she couldn’t comprehend the crash.

“Drinking and driving is such a selfish act, how could anyone go out so intoxicated when they know they could just call someone and they would give you a ride?” she said. “It is a selfish, selfish act and you can see how much it affects other people’s lives.”

Tabatha Lumley, 25, also McKenzie’s sister and a law student at the University at Buffalo, said members of her family — many of whom are in Jamaica — are almost too much in shock to make funeral arrangements.

“Our mother can’t come here, so we have to look into shipping Khadijah back to Jamaica, do you have any idea what that costs?” she said. “Why do we have to all suffer for the actions of someone who just could have been more responsible?”

Lumley said her sister was selfless and loving, the kind of person who would do a favor for anyone. She loved music and art and literature, and was attending a nursing program at BOCES in Spencerport. Her faith was so strong, she had the words “Psalm 27” tattoed on her torso so she would never forget its comforting sentiments.

Lumley broke down in tears.

“Our family is broken, we have lost a link and how are we to ever get that back?” she said. “And to lose her around the holidays, I mean, Thanksgiving is next week. This is a special time for us and how can we celebrate when we have lost her?”

The police investigation is ongoing.

Lumley said her family hopes for justice, not only for Khadijah, but for the families of all others killed in drunken driving crashes.

“This is so senseless,” she said. “We will fight and we will not give up.”