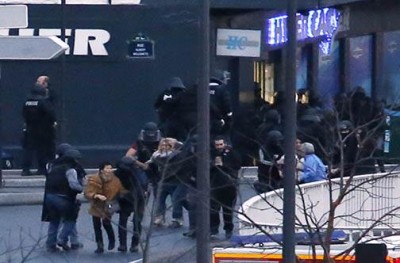 Five people were killed, including the gunman, and four were left critically wounded after a hostage drama in eastern Paris ended with a police assault on Friday.
Gunfire erupted as police stormed the Jewish store, where at least one armed assailant had seized hostages in Porte de Vincennes on the edge of the city. It was not immediately clear if the casualties occurred during the assault or earlier in the siege, nor whether a second hostage-taker was among the dead.
EXPLOSIONS, HELICOPTERS AND COMMANDOS AS PARIS AREA RESEMBLES WARZONE
First the long, agonising wait. Then fireballs, bullets — and suddenly France’s terror nightmare reached a dramatic and bloody end.
Parisians ran in terror amid shooting and explosions while in a small town nearby two Islamist hostage-takers died in a blaze of gunfire on a day when the heart of France resembled a warzone.
The kind of violence that seemed unimaginable in the City of Light brought to an end more than two days of brutal tension as police hunted the Islamist gunmen who had massacred 12 people at a satirical weekly magazine Wednesday.
In eastern Paris, police stormed a Jewish supermarket where at least one gunman had earlier taken several people hostage. Explosions rocked the neighbourhood — one lighting up the shop front in a fireball — and shooting erupted as the commandos burst in.
“It’s war!” screamed a mother as she dragged her daughter from the scene.
The gunman was killed along with four hostages, but as the siege ended several others fled to safety.
Ambulances raced to the scene, joining a jam of police vans and other emergency vehicles, all under the eye of helicopters.
Moments before, other special forces assaulted a printers’ business in Dammartin-en-Goele outside the capital, where the two main suspects in the Charlie Hebdo massacre had holed up with one hostage.
Explosions rang out and smoke poured from the roof of the building. The two brothers inside, who had led thousands of police on a wild manhunt for more than 48 hours, ran out in a desperate last stand and were gunned down. The hostage was saved.
The fiery denouement came at the end of a day when huge numbers of elite police descended on Dammartin-en-Goele and then in the eastern Paris neighbourhood to prepare for an inevitable battle.
“It happened very, very quickly. We saw helicopters and suddenly we saw CRS (elite police) all around us. We started to panic a bit,” said Stephane, 45, who works in a hazardous materials business and had been forced out of his house in the usually quiet town.
“They just gave us enough time to grab something warm to wear outside. Now we’re waiting,” he said.
Snipers set up on rooftops and van after van of police reinforcements deployed. Masked and helmeted troopers with automatic weapons could be seen peering out of a blue police helicopter hovering overhead.
They didn’t have long to wait.
At the Hotel Ruisseau in the capital, opposite the Jewish supermarket, the shock was just as intense.
Guests were just tucking into lunch when gunfire broke out across the street — the moment that a hostage-taker seized the store, expanding the country’s terror nightmare into the capital.
Almost immediately police fanned out across the neighbourhood and closed off streets and shut down traffic on the city’s vital ring road, which runs close by.
“We heard shooting, it all happened very fast. Police deployed very quickly,” hotel manager Pascal told AFP by telephone.
“They ordered us to stay hidden inside and to close the curtains.”
They also didn’t have long to wait. Then, in a flurry of fire and lead, the drama ended.

0 thoughts on “MORE SHOOTING IN PARIS”