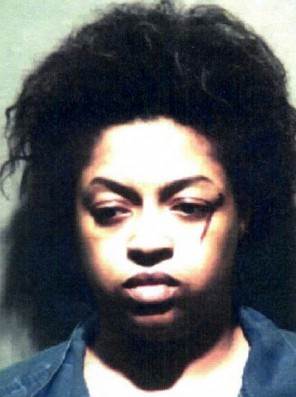 A Germantown mother and another woman accused of killing two toddlers and trying to kill two other children believed that they were releasing demonic spirits that had possessed the siblings, Montgomery County police said Saturday.

The two dead children — a boy, Norell Harris, 1, and a girl, Zyana Harris, 2 — were found Friday morning on their mother’s bed in a Germantown townhouse. Both had been stabbed repeatedly, police said. A sister, Taniya Harris, 5, and a brother, Martello Harris, 8, were seriously injured but are expected to survive.

Police said the women thought that they were performing an exorcism, although it did not appear they had followed any ritual.

“This was all about what was in their minds,” said Capt. Marcus Jones, commander of the county’s major crimes unit. “They felt like there was something bad going on with the children, and they were trying to release it.”

Detectives found two knives that might have been used in the attacks — one about the size of a paring knife and the other a bit larger, police said.

Avery, who has received mental health counseling, moved twice in recent years — from Western Maryland to Ohio and then to Montgomery, according to a minister whose church she attended. A relative said she had separated from her husband. Writings on her Facebook page suggest that she believes in God and fears Satan.

“The Devil was the enemy in their eyes,” Jones said of the women.

Sylvia Wade, Avery’s step-grandmother, said Avery loved her children and appeared to take good care of them. She recalled attending a birthday party for Martello at a Chuck E. Cheese’s a few years ago.

“I cried until I can’t cry anymore,” Wade said. “Some people are calling what she did evil. She is humble and meek. . . . To me, it takes a sick person to kill something you brought into the world.”

Wade added: “I don’t know what triggered it. She wasn’t herself. When a person is not of themselves, they are not responsible for what they are doing. They are in another zone.”

In the townhouse community where Avery lived — along Cherry Bend Drive, about 13 miles north of the Capital Beltway — at least one neighbor saw signs of possible trouble Thursday night. He spotted a child alone in a parked car and called 911, police said. As officers were on the way, two women came out of Avery’s townhouse, told the neighbor to mind his own business, took the child and went back into the home, police said.

When officers arrived, they knocked on Avery’s door but got no response. They didn’t hear or see anything suspicious and — after calling the county’s child welfare agency, where someone said the agency would follow up on Friday — they eventually left.

The next morning, a neighbor spotted other signs of trouble: an open car door, a knife on the ground near it and blood, police said. Officers were dispatched and were told about the call the night before. At the scene, the officers grabbed keys out of the car, unlocked the townhouse and make their way inside.

They spotted Avery, who was near one of the older children before she bolted out the back door. Police quickly caught her.

Sanford also was treated at a hospital for injuries, police said, and she was arrested Saturday after being discharged.

Avery’s Facebook page has smiling photographs of her children and several, serious postings about faith, God and the Devil.

“People are being deceived left and right every day and don’t care to realize it,” she wrote. “They think it’s safe and everything’s a game when this world is owned by satan himself who wants to dumb us down to think there’s no consequences for what we do.”

At the time, she was living in Hagerstown, Md., said Pastor Dan Thornton of Maranatha Brethren Church there. He met Avery through a program that provided groceries, haircuts, dental care and other services to families. Members of the church gave Avery and her family rides to church and bought furniture for them.

The family was forced to leave its apartment and was going to leave behind the furniture, Thornton said. But he and others retrieved the furniture, sold it at a garage sale and gave the money to Avery’s family. He said she projected confidence but suffered from mental illness. Church members regularly gave her rides to mental health counseling sessions, he said.

“Sometimes, she seemed to be in a low valley,” said Sue Thornton, Dan Thornton’s wife.

The Thorntons fondly remembered their dealings with Avery’s children. The oldest son, Martello, about 6 at the time, was “very, very pleasant and outgoing,” Sue Thornton said. His sister Taniya would walk right up to children her own age at church and was friendly to adults as well. “She was always glad to see us,” she said.

It was not clear how Avery and Sanford met. In a brief Facebook chat, Latrecia Blockett, Sanford’s sister, said family members had been unable to see or speak with Sanford since the slayings. Blockett declined to answer other questions.