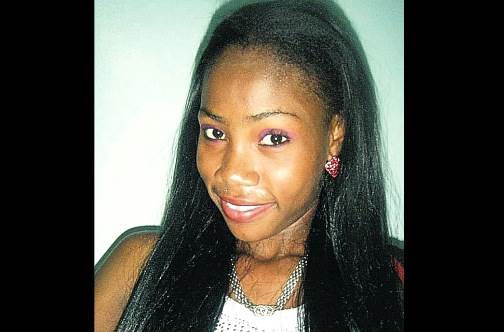 IN a mere 22 days, a cruel twist of fate shattered 18-year-old Kadeja Braham’s dream of advancing from a promising modelling career to becoming a flight attendant.

Last Thursday night, Kadeja succumbed to Stevens-Johnson syndrome, described by health experts as “a rare, serious disorder in which your skin and mucous membranes react severely to a medication or infection”.

The speed with which the illness ended the Pulse model and Guy’s Hill High School past student’s life has devastated her family, who are still trying to understand what went wrong, given that Kadeja had shown no sign of illness before.

To add to their grief, they need to find at least $556,000 to settle Kadeja’s medical bills, which they racked up in a desperate attempt to save her life.

Kadeja’s date with destiny started on Christmas Day 2013 when she felt the symptoms of a fever and took over-the-counter flu tablets before reporting to work at the downtown Kingston boutique where she was employed.

By that night she had lost her appetite.

The following morning, she noticed bumps on her body and her eyes and lips had become puffy.

“She started itching and she asked one of my other sisters to look at her back,” Kadeja’s sister, Dian, told the Jamaica Observer.

“We took her to St Joseph’s Hospital; they asked if she was allergic to anything. We said not that we know of, so they gave her some medicine, then told us we could go to KPH (Kingston Public Hospital) or University Hospital,” Dian explained.

“We went to KPH and they admitted her, and from there the bumps turned into blisters, then about two days later her skin started to come off.”

Fourteen days later, on January 9, Kadeja’s condition worsened and she was transferred to University Hospital where she was admitted.

“She was in a lot of pain and could only whisper,” Dian recalled, adding that one of the few words her sister was able to murmur was “hallelujah” while she (Dian) read the Bible to her.

But even with the help of specialists, Kadeja’s body could not fight this milder form of toxic epidermal necrolysis which medical officials define as an allergic reaction to medication, infection or illness.

Information posted on the Mayo Clinic website says that the exact cause of Stevens-Johnson syndrome can’t always be identified.

However, the drugs commonly associated with it include anti-gout medications; nonsteroidal anti-inflammatory drugs, used to treat pain; penicillins, which are used to treat infections; and anticonvulsants, used in the treatment of seizures.

“Infections that can cause Stevens-Johnson syndrome include herpes (herpes simplex or herpes zoster), influenza, HIV, diphtheria, typhoid, and hepatitis,” the Mayo Clinic website says, adding that in some cases, the disease “may be caused by physical stimuli, such as radiation therapy or ultraviolet light”.

According to the Mayo Clinic, it is difficult to prevent an initial attack of Stevens-Johnson syndrome because you don’t know what will trigger it.

“However, if you had Stevens-Johnson syndrome once, and your doctor determined that it was caused by medication, be sure to avoid that medication and others in the same class to prevent another attack. If the herpes virus caused your reaction, you may need to take daily antiviral medications to prevent a recurrence,” the Mayo Clinc says.

Symptoms of the illness include swelling of the face and tongue, hives, skin pain, a red or purple skin rash that spreads quickly, blisters on the skin and mucous membranes, especially in the mouth, nose and eyes, and shedding of the skin.

“It’s a rare syndrome. It’s not something that we see very often, but when it comes, it’s devastating,” Dr Wayne Fraser told the Sunday Observer yesterday.

The recovery period from the syndrome depends on the severity of the patient’s condition. However, health officials say the condition is fatal in at least 20 per cent of cases.

One doctor pointed out that while the syndrome is a reaction to medication, the exact cause can’t always be identified.

“The truth is, with most medications the benefits outweigh the risks,” said another doctor who opted not to be named. “Many people take medication every day and nothing happens to them. It’s just very hard to predict.

“It’s very hard to say, when a patient comes in with this type of condition, how they’re going to fare. We have to take it day by day and try and give them the best supportive care that we can because there is no cure, there’s no magic medication that you can give,” added the doctor.

Yesterday, Dian was less than pleased with the way she said her sister was treated at KPH.

“When we took her there on Boxing Day we got there at about 3:00 pm and it was not until after midnight that she was finally admitted,” she said.

She also alleged that on four occasions she and another of her sisters went to visit Kadeja at KPH only to find her on the floor. “The first time I saw her on the floor I told the nurse and she said Kadeja must have crawled off the bed,” Dian claimed.

She said that on another occasion, when she reported the matter to a nurse, her response was to ask her why didn’t she take her sister up from the floor.

“This was when her skin had started stripping off,” Dian said. “The treatment at KPH was just horrible.”

Amidst her grief, Dian recalled the affable nature of her sister.

“She was a jovial person,” said Dian. “She was very friendly, she was always smiling. Even the Facebook messages that her friends left, they were saying that they saw her the day before she fell ill and she was smiling and telling them Merry Christmas. She was always that kind of person.”