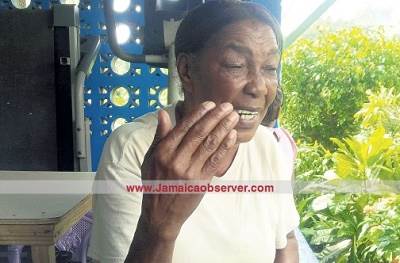 MONICA Coburn, the mother of the 44-year-old man whose killing by a cop from the Lawrence Tavern Police Station, St Andrew, was caught on video and went viral on social media, said she has forgiven the policeman responsible for his death. However, the cop, she said, should confess before God and ask for forgiveness or he will suffer a similar fate.

“I am sorry, very sorry for that policeman who did it. And you want to know why? Unless he goes on his knees before God and asks for forgiveness he, likewise, will perish, because he must confess. And if he doesn’t confess he’s not going to get any forgiveness,” Coburn told the Jamaica Observer on Friday.

“I forgive him from my heart,” added Coburn, an Adventist. “From my heart I forgive him — and I hope he asks God’s forgiveness. The day will come when every man will get his pay, whatever you do, and you can’t bribe God. There is no correction before God. It’s best for him to make his correction with God now, or else.”

Shop operator Garfield Coburn of Pigeon Valley in Unity, a rural St Andrew Community neighbouring Lawrence Tavern, was shot dead at a bar in the nearby community of Mahoney on March 6. The police had reportedly gone there regarding loud music being played at the bar when the incident occurred.

Constable Kevon Gordon was detained on March 13 and subsequently charged with murder. He was offered $250,000 bail in the Corporate Area Resident Magistrate’s Court.

On Thursday, Constable Dain Reid, who is also assigned to the Lawrence Tavern Police Station, was charged with giving a false statement to the Independent Commission of Investigations in relation to the matter. He was offered $100,000 bail. Both men are to return to court on April 27.

According to police reports, Coburn was shot after stabbing at Gordon.

But the video of the incident circulated on social media doesn’t appear to support the police version of the matter, which has also been disputed by residents.

Coburn died leaving three children, two of whom are 20 and 17 years old.

On Friday, his mother told the Sunday Observer that her son wasn’t the type to carry a knife and described the allegation that he stabbed at the police officer as “poor”.

“It’s amazing… he’s not the type for that,” Coburn said when asked if her son was known to be a violent man. “He’s just a guy who goes by himself and if him crack a joke, him crack and gone, especially to women. He’s a girl’s man. He likes to run jokes and make people happy.”

Residents in Unity spoke highly of the deceased man and confirmed that he was indeed a jovial person. Residents said they had never seen him involved in a dispute.

“He’s an innocent man. We are wondering why ‘Cut Mouth’ [Constable Gordon] had to kill the man,” a woman who identified herself as Maxine, told the Sunday Observer.

Coburn described her son as an industrious person, who was always tending his field or his chickens whenever he was not at his grocery shop. She said he was a noted community plumber.

The grieving mother and residents said Coburn was a caring person, pointing to the construction of a restroom facility close to a busy bus stop in Unity Square to cater to commuters.

As it concerns the video, the elderly woman said she has seen it but was unable to watch it in its entirety.

“I can’t come to grips that something like this would happen for nothing,” she said, adding that the police need to be given less lethal weapons, such as tasers, when they are patrolling communities to avoid similar incidents.

“What comes out of a gun is death. It doesn’t carry life. They should remember that. Once it goes off, you cannot pull it back; it’s going to do what you want it to do,” she said.

“Why? Why? Why? As a peace officer you go out there to make peace. That is not how you approach anybody. Sorry cannot help this,” she lamented.

“If he used to go around and give trouble that would be different, but he’s a man who doesn’t go around and trouble anybody,” said Coburn, who along with her son’s two adult children have been receiving grief counselling from social worker/counsellor Carmen Lewis of the Justice Ministry’s Victim Support Unit.

“I asked God for justice,” she said “and I know He’s gonna give me justice.”