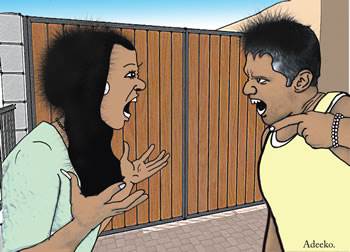 IT is another Valentine’s Day celebration and I must confess that I really dreaded the day coming. If I had my way and I have the power to turn things around, I certainly would wish that the day is never celebrated again.

Of course, I know it is a case of different strokes for different folks, but of course, I have my own story to tell. Spencer and I met on a Valentine’s Day. He was newly transferred to our bank from outside the town and he doesn’t know anyone.

Incidentally, we were the only two people who had no date for the evening and our other colleagues jokingly paired us up. He had no date and could not travel all the way back to Akwa Ibom to be with his girlfriend. I just suffered from heartbreak and I would say I was fortunate to have a date for the night.

After the group date with other colleagues, Spencer and I went out for a drink, there we got to know each other more. I learnt from him that though, he was in a relationship he was not enjoying. We became closer and he proposed marriage to me the following year to mark another Valentine day celebration.

However, within the year, a lot of things happened which I believed should have made our relationship stronger, but little did I know that I was living in a fool’s paradise. Three weeks after Spencer joined us in our Lagos office, there was a big fraud and he happened to be one of those who were sacked. Because what I thought we shared, I took up the responsibility of making sure that he was comfortable and okay.

He didn’t want to return to Akwa Ibom empty handed to borrow his words. I did all I could to make him comfortable and happy and of course getting another job was not easy. Even up to the time we got married, he had no job.

I should let you know that I am four years older than Spencer. I didn’t hide this fact from him from the outset and he told me that age did not matter inasmuch as we loved each other, I also didn’t look as if I am older than him.

My nightmare, however started when after two years of marriage I still couldn’t give birth to a child. We are both Christians and believe that only God can answer us, but his parents, especially his mother who never accepted the fact that he married outside his tribe did not understand this.

At the initial stage, my husband supported me, but in recent times, especially after he got a new job, my husband became another man. He changed completely from the man I married. He would call me names like; old hag, over used prostitute and many unprintable ones. He actually told me that he never married me for love, but out of pity.

The last straw however, came few months ago when we went for a church member’s child’s naming ceremony. Because the lady who delivered and I are quite close, I was involved in making sure that her guests were well taken care of. We have hardly left the place when my husband started his trouble. He accused me of neglecting and not giving him the best treatment. His biggest grouse was that I served him food late. I tried to explain and pleased with him, but he minced no words to let me and every other person who were at the parking lot to know what and how he feels about me.

He called me names and didn’t care if people were listening. To make it worse, he drove off and left me behind at the party. I have since contemplated leaving the marriage, but my pastor and other elders in the church advised me against doing so.

As if all these were not enough, he left the house two weeks ago and I haven’t heard from him. Can you imagine what today; Valentines Day looks like for me? And please, advise me, is it really necessary to continue staying in a loveless marriage? I need your help.

0 thoughts on “MY VALENTINES DAY NIGHTMARE”