NO G-STRING, THONG OR CROTCHLESS SHALL PROSPER

Hi Met,
I love your website and I read it often. Keep up the good work. I’ve been through a lot in my life and I believe that GOD will continue to bless me. I would like to let this woman know that I saw all of the messages and pictures that she sent to my husband. And I know that they are more than “friends.” No weapon formed against me shall prosper.
(See attachment) 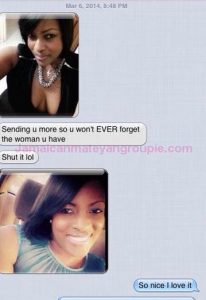 0 thoughts on “NO G-STRING, THONG OR CROTCHLESS SHALL PROSPER”