NOT SURE WHY GATLIN WASNT BANNED FROM THE OLYMPICS, NOW HIM HUNGRY FI BOLT’S SUCCESS

US sprinter Justin Gatlin said he was “hungry” for success yesterday as he prepares to take on Usain Bolt for what would be a highly controversial second Olympic crown.

Gatlin has twice served doping bans in his career, meaning a 100m or 200m win against the popular Bolt would be polarising — especially after Russia’s athletics team was suspended over a drug scandal.

Gatlin, 34, has set the two fastest times this year and he is a real threat to two-time defending champion Bolt, whose build-up has been troubled by a hamstring injury. 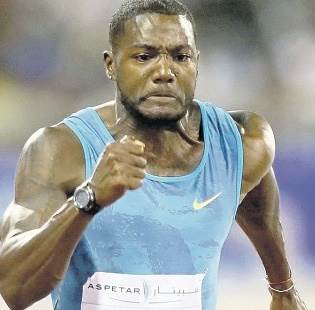 “I’m just going to go out and do what I need to do,” he told reporters at the US track and field team’s training base near Copacabana.

“This Olympics is going to be special. I know everyone’s going to bring their A-game so I’ve got to make sure I’m ready.”

When asked how he was feeling, Gatlin told reporters: “Hungry.”

“When I go out there I’m just going to celebrate and have a great time.”

Gatlin set personal bests over both the 100m and 200m last year, raising eyebrows after Norwegian researchers found in 2014 that the effects of performance-enhancing drugs could last for decades.

He looked favourite to beat Bolt at last year’s World Championships over 100m, but was ultimately undone in both sprints by commanding performances from the Jamaican.

It was perhaps just as well after Britain’s Sebastian Coe, now head of athletics body the International Association of Athletics Federations, said the prospect of giving Gatlin a World Championships gold medal made him “queasy”.

But Gatlin said he was inspired to continue competing by fans urging him on through social media.

“The fans, just giving well-wishes through social media, just hoping I come out here and do what I need to do as an American and as an athlete,” he said, when asked how he found the drive to stay at the top of his sport.

“That’s what gives me the drive to keep going forward.”

Gatlin is not America’s only drug-tainted sprinter. LaShawn Merritt — who served a 21-month ban for testing positive for a banned steroid in 2010 — could threaten Bolt over 200m.

And Tyson Gay returns as a member of the 4x100m relay squad after completing a one-year suspension for testing positive for a banned steroid.

10 thoughts on “NOT SURE WHY GATLIN WASNT BANNED FROM THE OLYMPICS, NOW HIM HUNGRY FI BOLT’S SUCCESS”