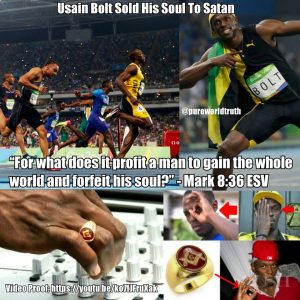 Usain Bolt is a Jamaican sprinter and regarded as the fastest person ever timed. I’m not sure if I should say congratulations about the recent race he won. For those who are truly awake realize that the Elites and the spiritual realm are controlling this world. And if you aim to be high rank famous or be the best at a sport, you would have to take an oath with the Satanic Elites. You would have to sell your soul to Satan. Now the individual’s soul is not literally gone, selling your soul just means you’ll have less control of yourself while demonic spirits, money and the Elites will have more control over you. Usain Bolt sold his soul in order reach this far by joining the Freemasonry Brotherhood. Now notice the freemasonry ring he’s wearing and the Illuminati hand symbols he flashes. Freemasonry is the largest international secret society in the world, with more than 10 million members. 40% of Masons are low levels so they’re not aware that Satan controls the system. But soon they’ll know. And it’s obvious that Usain Bolt is aware at this point. Even though they know something, the Mason has already taken an oath not to spit out any secrets to Non Masons from the start. Since most of you reading this are Non Masons, expect Masons to lie to you in person as they are commanded to. Now I’ll be citing sources from their own book proving that they worship Lucifer and practice Occultism in order to advance in life.
__
▶️”The Masonic order is not a mere social organization, but is composed of ALL those who have banded themselves together to learn and apply the principles of MYSTICISM and the OCCULT rites”◀️- Lost Keys of Freemasonry’ pg. 19, Manly P Hall 33°
__
▶️“When the mason learns that the key to the warrior on the block is the proper application of the dynamo of living power, he has learned the mystery of his craft. The seething ENERGIES of LUCIFER ARE IN HIS HANDS , and before he may step onward and upwards, he must prove his ability to properly APPLY this energy.”◀️-‘Lost Keys of Freemasonry’ pg. 48, Manly P Hall 33°
__
Although Bolt is a hard working talented athlete, spirits are giving him the extra power to win his races. Please pray for Mr. Bolt. #2016Olylmpics #usainbolt