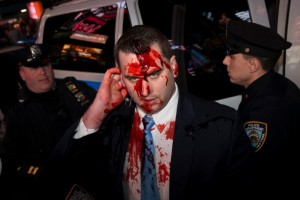 Following the announcement of the grand jury’s decision in the Michael Brown case, the outrage was felt from Ferguson to New York City and in other parts of the country where spontaneous and planned protests broke out during the night and early morning. During a demonstration that was held in Times Square, a protester splashed NYPD Police Commissioner William Bratton (not pictured above) and other officers and officials with blood-red paint, ostensibly symbolizing the police’s disregard for humanity. The protester, who has been identified as 26-year-old Diego Ibanez, was arrested for assault on a police officer, obstruction of government administration, disorderly conduct, harassment and criminal mischief. He is slated to appear in court today