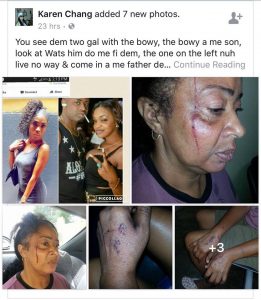 Im texting in regards to this blog that has been sharing world wide. The pic u post this morning of the complainant, accuse n d ladies , d left of he photo is ME, we have reach out to a few just to share sides. It destroy ppl character when the half of the story haven’t been told.

There is no 2 girlfriends in d picture, the son did not beat his mom. I’m the girl on the left again I came to visit the daughter in law is my aunt. Shes a type of mom that doesn’t like peace she’s tormenting troublesome. neighbors don’t talk to her other close family members dont either because of how she behaves all the time. Last week, the mom n son were in hard reasoning abt money nothing too hard, then she started cursing her son,he ignored her,his girlfriend was standing beside him, she then lashed out refer to d girlfriend ina rude way, then d girlfriend reply as it touches her to know they don’t speak in years all bcaz of her ways n now she saying rude stuff just to b in an argument with her. They started cursing d son kept on telling his girlfriend to ignore her ,she stared cursing the girl on d left , for 2 days she curse ,no1 answer her it didn’t work for her so she kept picking around d son came out of his house to warm her to just chill n act her age, she cursed him out more cas she needs d drama. D warning got intense , he warn her not even a up face one, she went inside for a knife, imagine urself ur mom up in ur face with a knife ,,neighbors was watching they yell at her to cool she refused. The son was draped by his mom he then forced to take the knife from him she rastle a bit that’s where d hand marks came from, they fell in d fence and she obtained marks again on d hands, d son had a long nail one 1 finger, scared on face ..she went to police the same evening police came d day after , he went and apologize before police came but d process was already done. He stay in jail for a night . she told police her son punched all over n beat r up. A lot of eye witness were there, how I come in this idk. There aren’t any brutally beaten marks . its yard where different family member build their own apartment, its set up where no1 has to tell her excuse as her part is different. Its terrible and I just had to speak on it.