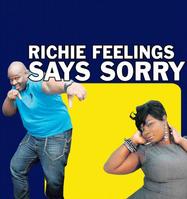 Apologises to Pamputtae for babyfather “joke”
Davina Henry, Staff Reporter
Weeks after a joke he made on the popular Talk Yuh Mind online show regarding the paternity of dancehall artiste Pamputtae’s baby, Richie Feelings is now apologising.
During the show, Richie Feelings alleged that Pamputtae had relations with Potential Kid and that he may be the father of her baby. Both Potential Kid and Pamputtae denied the claims.
“I would like to sincerely apologise to Pamputtae. Everybody know say me and her a friend. This babyfather joke is one that I’ve been running with her from she pregnant. I’m always running joke wid Pamputtae and she never tek it personal. Maybe is her other half have a problem wid it,” he told THE STAR.
According to the selector, he decided to apologise because several persons were taking the joke too seriously.
“I am a jovial person and I love run joke. If the joke has done any damage to Pamputtae’s relationship with her babyfather, then I apologise. A joke me did a run. If she vex, me will sing for her. Potential Kid is not her babyfather. She have a nice babyfather. Her babyfather goodly leff her right now, but him nuh gone far. Memba say a she say she have husband lock enuh,” Richie Feelings said.
The selector is scheduled to appear on the Magnum All-Star Million Dollar Face-Off tomorrow night where he will go up against Bass Odyssey. He recently won the first clash against the Uncontainables. The Magnum All-Star Face Off will be hosted by MC Nuffy and will be held at the Famous Nightclub in Portmore, St Catherine.
Bookmark and Share