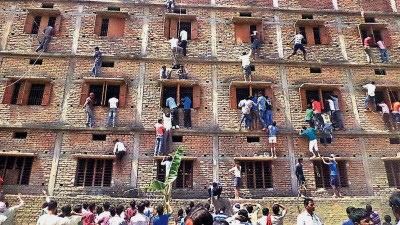 There was shame in store for Bihar as images emerged of large-scale cheating by students in the state board exams.

What’s worse, instead of taking strict action, the state education minister PK Shahi tried to shrug off government’s responsibility by saying, “the government is helpless to stop the dishonest practices unless parents and students cooperate for the same”.

Tall claims of the Bihar School Examination Board of conducting free, fair and peaceful examinations fell flat as students were seen openly cheating at various centres.

Shocking visuals of parents and relatives scaling three to four storey exam centres to pass on chits to their wards added to the shame.

At several centres, police personnel failed to stop them while at some they are seen even helping in the cheating.

When asked about the unfair practices being used in the examination on the side-lines of Bihar legislative council, Shahi questioned the reporters in return, “Over 14 lakh students are taking the examination. You tell us what can the government do to stop cheating id parents and relatives are not ready to cooperate? Should the government give orders to shoot them?”

The education minister went on record to say the state government alone cannot stop the unfair practices is students and parents don’t help. “The orders for conduct of free and fair exams have been given to district magistrates and police officials,” he said but when it was pointed out that even cops were seen helping students, Shahi said, “It may be that even their kin are taking the exams so they may be helping.” The minister expressed helplessness in taking action even in the remaining exams.

It may be mentioned that over 14.26 lakh students are appearing at the BSEB matriculation examination being held at a little over 1,200 centres in the state. About 1,000 examinees have been expelled from the examination in the first two days, board officials said. The examination will conclude on March 24.