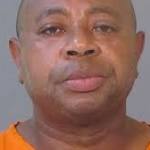 Louisiana pastor shot to death while preaching in church

(Reuters) – A Louisiana pastor was shot to death while preaching in church, and the suspected gunman was arrested after surrendering to police, authorities said on Saturday.

Karey walked into the church, shot Harris twice with a shotgun and then fled, Myers said.

About 50 to 60 people were in the church at the time of the shooting, Myers said. “It is quite shocking and I am imagine it was chaotic,” she said.

Karey called the sheriff’s office minutes later to surrender and turned himself in without incident, she said. Karey later told investigators about a shotgun and .22-caliber pistol he had left in a wooded area and they were recovered, Myers said.

Investigators have not determined a motive for the shooting and it is unclear if Harris and Karey knew each other. Karey has no known criminal record, Myers said.

Karey is being held in custody on a $1 million bond, Myers said.