PEARNEL SEH HIM AND DI WIG SHALL NOT PART

Don’t expect new Speaker of the House of Representatives Pearnel Charles to throw his wig (also referred to as cap) in the garbage any time soon.

Charles, a veteran member of the House, raised eyebrows and ushered in unlimited chatter when he donned the once discarded wig shortly after he was elected the 16th Speaker of the House of Representatives last month.

The wig, according to critics of the item, represents one of the last bastions of colonialism, and injects interest in a neo-colonial state that some would rather see the back of. The last two Speakers of the House of Representatives Michael Peart and Delroy Chuck did not wear wigs. In fact, the last man to popularise the wearing of the wig since the 1970s was former Senate President Ossie Harding, who served from 1980 to 1984, and again from 2007 when the Jamaica Labour Party ended an 18-year reign by the People’s National Party until his retirement in 2011.

Charles insists that there is no cultural or political attachment with his wearing of the wig, while stressing that he was merely following the rules of Parliament. 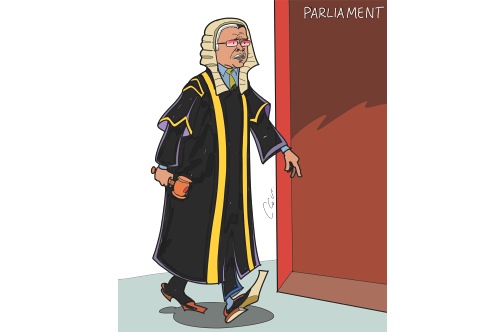 “I have no special attraction to either the wig or gown assigned to the Speaker of the House,” Charles told the Jamaica Observer in an interview.
“You are not obligated to wear the wig or not to wear it. One of the reasons why I am not worried about wearing the cap and gown is that it is assigned to the Speaker. The gavel and mace are two instruments to guide the Speaker, with the mace being the more important, as the Parliament cannot be in session without it. That’s what we inherited from NW Manley and Busta (Sir Alexander Bustamante) our former leaders. We are still operating under the Queen. If we want to put away the prayer etc, then let’s go independent of the Queen and wear shorts to Parliament if we want. But as long as we are under the British Monarchy we should follow the rules. I have no feeling that if I take off the wig and gown I will be less neo-colonial. People say we are independent, but independent of what? The Queen is Jamaica’s Head of State, so we are no different from what happens in London. So as long as the Queen is head of Jamaica’s Parliament, we are her subjects.

“Taking into consideration that the Jamaica Parliament is headed by Her Majesty the Queen, the mace represents the Queen. If the mace is not in place, there can’t be a formal operation of the House. The Speaker has been given a gavel, and the Standing Orders outlining his authority and obligation as Speaker,” he said.

Regarding criticism by fellow Parliamentarian Ronald Thwaites about his head gear, Charles said:

“Ronnie is no more anti-colonial than I am. Why does he still wear his gown when he goes to court? What does that symbolise – that you are half colonial? The proper dress of the Speaker is the gown and cap. You can’t be half dressed. It seems that the cap that the Speaker now wears is more important than what goes on in Parliament.

“What does the wig symbolise that the gown does not? Why did we get out of the wearing of the Kareba suit? referring to the tie-less style of dress introduced to the Jamaican Parliament during the 1970s by former Prime Minister Michael Manley. “What does the jacket and tie represent? Isn’t that a colonial dress too? I am sticking with my cap and gown. The cap, gown, gavel and mace distinguish me from the other members. We swear allegiance to the people, but we pray for Her Majesty The Queen, her heirs and sucessors. I am not wearing the coat without the cap,” Charles said.

Charles said that he has a preference for Jamaica to become a Republic, but maintained that there were several things that must be done to have that in place.

“That can only happen if we decide that we can stand on our own. As soon as the country decides, I would give it my full support.”

Regarding his new role, the MP for Clarendon North Central is on a mission to ensure that the period that he is presiding as Speaker is a better one than the last one or two that Jamaica has had.

“Parliamentarians must follow the rules as set out in the Standing Orders, like respect for one another, that there will be proper decorum and that when it is all over I can stand in line with the best Speaker that the Jamaican Parliament has had.

“I am well aware that this can only come if I perform my duties fairly and firmly in treating MPs as MPs, not as PNP and JLP.

“It is my intention not to fail on any of these points. Standing Orders 40, 41, 42, and 43 deal with the authority of the Speaker. So when the House breaks out into a brawl, it is the Speaker who has failed to use his authority to see that the highest standards are prescribed there are certain things that must change, among them (1) when the Marshal enters Parliament with the mace, it is a requirement that all members stand and remain silent until prayer is said and the Speaker indicates for them to sit. That is not happening now. (2) When the Marshal picks up the mace at the end of the session, every person in Parliament, including not just the members, but the media and visitors, are requested to stand and remain silent until the Marshal goes through the door with the mace. That too, is not happening. We are having people follow the Speaker out. That should not happen. I will be seeking the cooperation of my colleagues in ensuring that people can watch the operations of Parliament on television.

“I have always got along with MPs from either side of the House and I propose to treat them fair but firm, right across the Parliament. Over 90 per cent of parliamentarians are not involved in ruckus in Parliament. A small number of us allow journalists to refer to us as ‘Gangs of Gordon House’. If it means that our behaviour and decorum can lift that image, I am prepared to lead that. There is a perception that we have to change … that our parliamentarians are involved in riots in Parliament. We must lift the standard.”

It is no secret that Charles was taken aback when he was offered the Speaker’s job by Prime Minister Andrew Holness, and there was some amount of reluctance on his part to sit in the chair. But he admitted that he has since grown to love his latest assignment.

“I did not consider the Speaker’s job to be as important as I have now discovered. I have had calls, letters and invitations from countries like Nigeria, Canada, Cuba, Argentina, China and many others in the short period of time that I have been Speaker, for me to visit the sittings of Parliament in these countries.”

Charles’ selection as House Speaker by Holness was influenced not only by his experience and ability to get on with his colleagues, but by his perfect attendance record during the life of the last Parliament.

He said that in the last four years under PNP rule, he had never been absent from one session of Parliament. During the period between 2007 and 2011, he said that he was never absent except for when he was away on Government business, having served during that time as Minister of Labour and Social security.

“My attendance record and relationship with the MPs across the board is what led to the PM appointing me,” said Charles, who is serving his sixth term as MP, having previously served as Senator twice.