SO SAD; MONUMENT WITH CHILDREN KILLED RUNS OUT OF SPACE

Secret Gardens’ All Cried Out – Monument To Remember Children Killed Across The Island Running Out Of Space.

Kamesha Stevenson (left) and Sandra Kelly from Hylton’s Marble Works adding more than 2,000 names of children who died tragically to the monument at Secret Gardens on Church Street in downtown Kingston.
Less than eight years after it was established, the Secret Gardens Monument in downtown Kingston is running out of space to record the names of Jamaica’s children killed under violent and tragic circumstances. 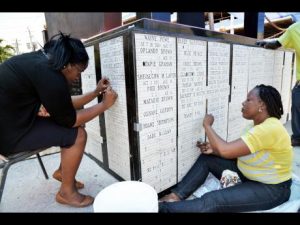 The Kingston and St Andrew Corporation (KSAC) last week added another 214 names to the monument located at the intersection of Church and Tower streets almost in the heart of downtown.

The latest names added to the monument last week were of children killed between 2011 and 2015.

Now, there are concerns that the space left on the monument can accommodate only 20 more names, and at the rate we are killing our children, it could take a few painful months to shamefully fill the space.

“There is about 24×32 inches left on one side of it for it to be completed. That can only hold – and I am estimating – about 20 more names, including the (children’s) birth and death dates,” said Sandra Kelly, one of two employees from Hylton’s Marble Works who, with care and precision, stencilled in the additional names on the mournful monument last Tuesday.

“It is indeed painful,” reflected Mayor of Kingston Angela Brown Burke, who last Friday was in obvious mental anguish as she described the pain she feels whenever the names of more children are added to the monument being maintained by the KSAC.

“I continue to be concerned about what happens to our children, and I’m convinced that we need to design a programme to protect them. We cry and mourn when one child is killed and then we move on, but we need to do more in all areas,” added Brown Burke.

“That monument tells a story that is very disturbing and should put us all to shame in Jamaica,” said Blaine.

ABUSE AND DISREGARD
“It is a story about the abuse and the disregard that we have for children generally, as a society. “When it was first erected, I questioned the fact that we shouldn’t have so many names every year. I was concerned that we would soon run out of space. And now we are adding 214! It means that we are out of space.

“It is an indictment on us as a country, as adults. And I want to make a plea to Jamaicans for us not to add any more names to that,” added Blaine.

The outspoken children’s advocate stressed that many of the names on the monument are of relatives and children who were killed on the same day.

She said it was also noteworthy that the names are mostly of babies, toddlers, and teenagers from the inner-city communities, who are generally more vulnerable.

“As the children’s advocate, I’m quite concerned that children continue to feature so much in the statistics,” offered Children’s Advocate Diahann Gordon Harrison, who was also saddened by news of the additions.

“It’s sobering and telling at the same time, and it’s good reason for us not to give up as our children need us to continue speaking up and standing up for them,” added Gordon Harrison.

The monument bears a sculpture of a child crying, and on the four sides of its black square base the names of the children are etched. Among the names added last week were 14-year-old Amoya Brown, who was hacked to death in St Ann in 2015; 11-year-old Steven Williams, who, also in 2015, was found peppered with gunshots in New Bowen, Clarendon; and teenagers Raymond Givans, Ricardo Briscoe, and Alex Turner, who were among four killed in the Monymusk Housing Scheme in Clarendon in April 2015.

The three teenagers and 35-year-old Marquis Hamilton were found lying face down with gunshot wounds to their heads.

4 thoughts on “SO SAD; MONUMENT WITH CHILDREN KILLED RUNS OUT OF SPACE”